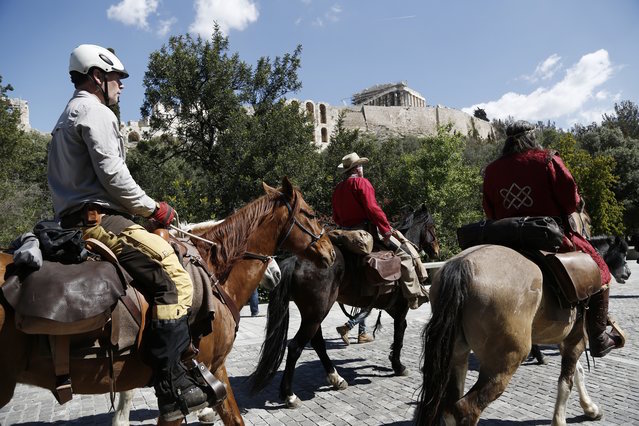 The documenta 14 art exhibition got off to an official start on Sunday with a unique event in the centre of Athens, as a cavalcade of 11 horses and riders wound its way through Sunday crowds on Dionysiou Areopagitou Street beneath the Acropolis, beginning a journey to Kassel, Germany.
Photojournalists and hundreds of art lovers, as well as the public going about their daily business, watched as the 11 riders set off on a journey that will cover 3,000 kilometres in three months, back to the city where the documenta14 exhibition is based.
This year, for the first time, the exhibition will be “shared” between Athens and Kassel, taking place in the Greek capital between April 8 and July 16 and in Kassel from June 10 until September 17.
Talking about the significance of the horseback journey through Europe, documenta14 artistic director Adam Szymczyk said it was a “line we are drawing that links many European countries.”
“We were aware from the start of the complexity and cost of the journey but it is a long and beautiful journey. First of all for the riders and the people in the cities that will experience it and secondly as an allegoric journey through unknown places that strengthens the relationship between horse and human, a two-way relationship of taming and culture that is forgotten. Whatever happens is part of the journey,” he said.
The idea was conceived by Scottish artist Ross Birrell and was inspired by the horseback ride that Swiss author Aimé Félix Tschiffely carried out in the 1920s from Buenos Aires to New York. Birrell describes his project as “Hermes Transition” since the cavalcade includes a Greek thoroughbred Aravani horse from the mountains of Arcadia named Hermes.
(source: ana-mpa)