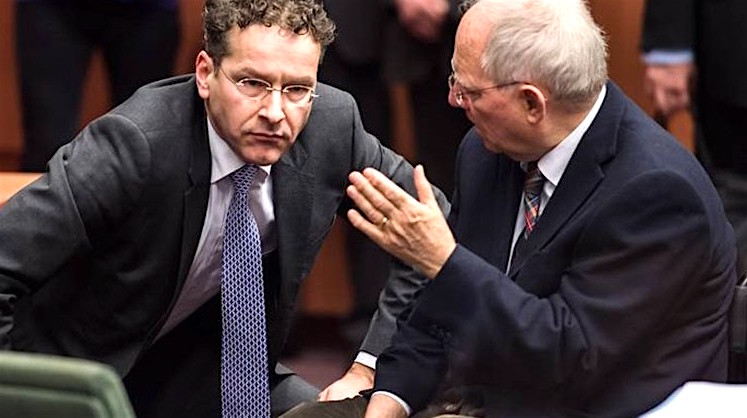 German Finance Minister Wolfgang Schaeuble is to back down on today’s (Friday) meeting of euro zone finance ministers in order to unlock the bailout review negotiations between Greece and creditors, according to a Euro2day.gr report.
“The position of German Finance Minister Wolfgang Schaeuble is no longer identical to that of the International Monetary Fund, as the sudden activation of the SPD following underground contacts with Brussels and the European Commission forced Mr. Schaeuble, in a communication he had today with Angela Merkel, to tell the chancellor that the issue of Greece should proceed and not delay any further as it is harming the whole European project,” a high euro zone official told Euro2day.gr.
The same source told Euro2day.gr that the contacts between Germany and Brussels were initiated by Vice Chancellor Sigmar Gabriel who activated the electoral mechanisms of his party.
On Thursday, the German finance minister met with Eurogroup President Jeroen Dijsselbloem in Berlin. However, there is no information on what the two men discussed regarding Greece.
On Wednesday there was a series of telephone contacts between European Commission President Jean Claude Juncker, Sigmar Gabriel and President of the German Republic Frank Walter Steinmeier, who meets with Greek Prime Minister Alexis Tsipras today (Friday).
The same source told Euro2day.gr that Juncker told Tsipras to “not back down” and not request a summit of euro zone leaders, as it is still premature. According to the European Commission president, there are many different opinions within the euro zone regarding Greece’s bailout and the situation should be made clear in the Eurogroup in Malta and then decide if there is a need for the 17 state leaders to have an extraordinary meeting.
However, the euro zone official said it is not certain that there will be a clear progress in the Eurogroup, as the change in the attitude of Germany happened on Thursday and it is unknown what stance the IMF would take during the meeting.
Earlier, Schaeuble had expressed optimism that the bailout program evaluation will close soon but not in the Malta meeting.