GRNews
GreekReporter.comGreeceSETE: The Only Sector Growing Stronger During the Crisis Is Tourism

SETE: The Only Sector Growing Stronger During the Crisis Is Tourism 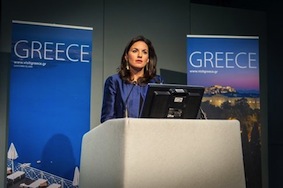 Tourism has been the only sector strengthened during the crisis, Greek Tourism Confederation (SETE) said after a meeting with Prime Minister Alexis Tsipras, Tourism Minister Elena Kountoura, State Minister Alekos Flambouraris and government spokesman Dimitris Tzanakopoulos.
The 2017 tourist season presents a unique chance for Greece that must not be lost, SETE underlined. Provided that the agreement with the creditors is immediately concluded and the regional issues remain stable, the increase in arrivals and revenues will contribute one point to GDP, they said adding, that this is important for the creation of new jobs and the achievement of fiscal targets.
Moreover, SETE will take initiatives with other social partners and the Economic and Social Council of Greece to further strengthen cooperation in the primary sector, commerce, construction and industry. The aim is to exit the crisis and render Greece a leading country in the provision of high standard services.
Source: ANA-MPA