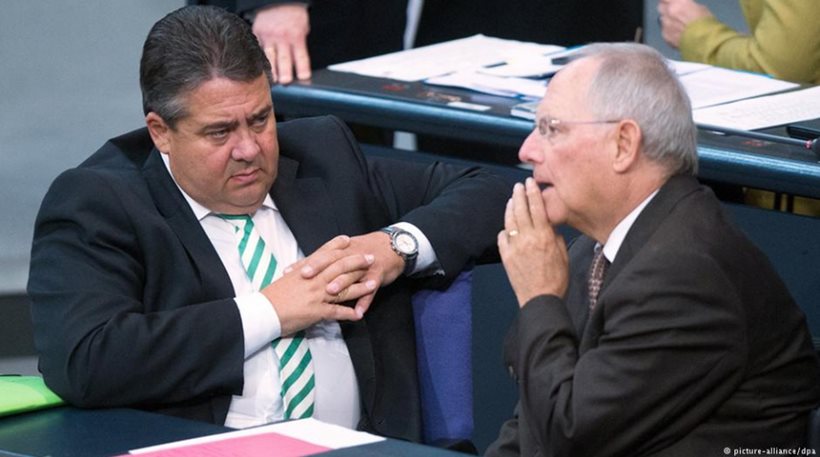 German Finance Minister Wolfgang Schaeuble on Friday criticized his country’s Minister of Foreign Affairs and Vice Chancellor Sigmar Gabriel for “sending wrong messages to Greece.”
On Wednesday, Gabriel met with Prime Minister Alexis Tsipras in Athens. He later made the comment that he recognizes the reform efforts Greece is making and expressed the belief that the country needs further financial aid from the EU. Gabriel also said that Greece is in the euro zone and will remain as a member, and that he will work so that the bailout program review is completed in April.
Speaking on German radio, Schaeuble appeared annoyed by the  statements made by Gabriel, saying that they send the wrong message and move in the wrong direction.
“Europe’s problem is not the amount of money given but how they will be used in the right way,” the German finance minister said.
Asked whether Greece can remain in the euro zone in the present conditions, Schaeuble said that the condition for the country to remain in the common currency bloc is to restore its economy.
“Greece can remain in the euro zone only if they create a fully competitive economy,” Schaeuble said.
Earlier, the German finance minister had argued that the Greek opposition parties should commit to the requirements of the bailout agreement from 2019 and beyond.
“Since Greece will have elections in 2019 and this time the opposition is opposed to the measures, then we must find some kind of wording that they agree to legislate the measures, regardless of the outcome of the elections. This has been done in other countries and in Greece in the past,” he said.