EU's Future Prospects the Focus of Kotzias-Gabriel Meeting in Athens 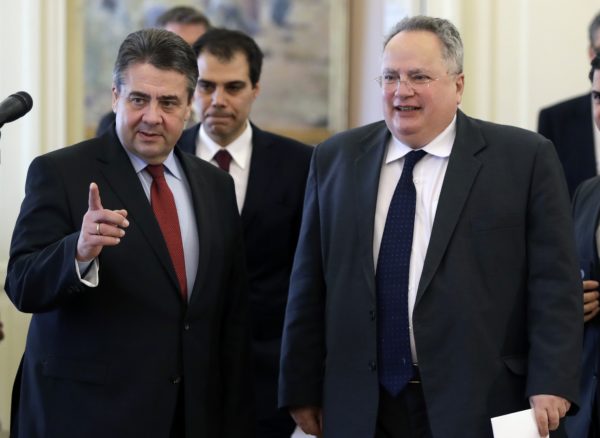 “Greece belongs in the Eurozone,” German Foreign Minister Sigmar Gabriel said on Thursday, during joint statements with Greek Foreign Minister Nikos Kotzias after their meeting in Athens. He also emphasized that this discussion was now closed, since “Europe cannot become stronger if it progresses with amputations.”
The two ministers announced that Greece and Germany intend to make their cooperation closer in all areas, including foreign policy. In addition to Greek-German cooperation, their discussion covered all crucial regional and European issues, with special emphasis on the refugee and migration crisis.
According to Kotzias, they discussed developments in the Balkans and Eastern Mediterranean, especially the Cyprus issue where Greece “desires, as all countries do, a peaceful solution that is viable and within the framework of international law.”
“We all know that Greece and the Greek government, including myself personally, believe that the Cyprus issue is primarily a problem of occupation and reject all thoughts of third countries having rights of intervention on the island. We are a country that, like Germany, believes in international law and the proper functioning of international organizations, and also that problems must be solved through consensus,” Kotzias said.
Regarding the future of the EU, Kotzias and Gabriel agreed that a good future of Europe would ensure peace and was in the best interests of all. The German minister referred to the need for a stable EU that will protect the future of young people and the prosperity of all its nations with the tools of growth and security. Gabriel stressed the need for reforms, both on the level of member-states and on the level of the Eurozone, in this context. “When one considers the future of the next generations, one wonders whether the peace and prosperity of recent decades is something certain,” noting that high youth unemployment, nationalism, daily clashes, conflicts and refugee flows appeared to create a much more precarious future for young people growing up in Europe today. Stability in Europe could help increase security but this cannot be driven by one large country, he said, while noting that Europe was not just Germany. “Germany is a stable country that has some power and wants to assume its responsibilities. We know that we must offer much in order to achieve this in a framework of security but, at the same time, we have to say that every country regardless of size — all the countries are at the same level and none looks down on the other — is called upon to deal with its issues,” he said.
Greece definitely faced economic issues, Gabriel added, and the Greek people have had to shoulder a great burden for a long time, while politicians had to make tough decisions in order to extricate the country from the difficult situation it was now in. Many politicians in Germany, including himself, had great respect for the efforts made by the Greek people and wondered how to proceed on the issue of European policy at this difficult time, he added. Gabriel referred to the need to create tools that will lead to and strengthen economic growth, since there could not be economic stability without growth. “We created the EU because we wanted to focus on peace but coal played a very important role then, in offering prosperity to the citizens of Europe. We will not succeed in keeping Europe alive if we do not succeed in providing young people with solutions and prospects,” Gabriel noted, pointing to high youth unemployment rates and the danger of a “lost generation.”
“We are a strong country and we want to help, knowing that the other countries must be well in order for us to be successful. We want to support your efforts also. We produce more than we can consume ourselves and live, in the final analysis, on the need that there is in other countries to buy the surplus goods that we produce,” Gabriel said.
Regarding the refugee and migration crisis, and the issues that have arisen with neighboring Turkey, Gabriel noted that this was a problem that concerned the EU as a whole and not individual countries, like Greece and Italy. “We must therefore work together and try to all move in the same direction,” he said. Kotzias noted that the German minister will continue talks on the refugee crisis in Athens, meeting Migration Policy Minister Yiannis Mouzalas and Alternate Citizen Protection Minister Nikos Toskas.
Source: ANA-MPA