Tsipras to Gabriel: Greece Is Determined to Work to Regain Social Contract 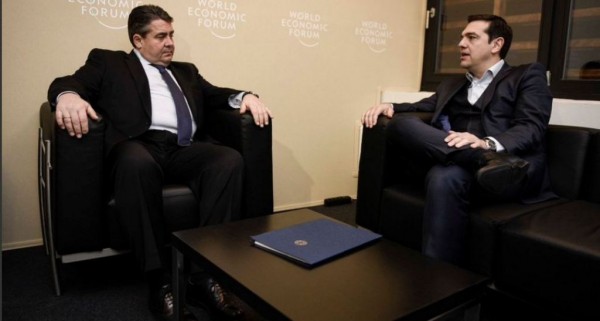 The dilemma is whether EU countries will regain the social contract and social acquis or if they will remain stuck in racist slogans which are unfortunately being heard from officials, Prime Minister Alexis Tsipras told German Vice Chancellor and Foreign Minister Sigmar Gabriel during their meeting at the  Mansion in Athens on Wednesday.
“Greece chooses the first category and is determined to work for it,” Tsipras said.
On his side, Gabriel referred to the ongoing second program review saying decisions are difficult on the issue but a solution should be reached in April. “We don’t want to have a story with no ending. We all have to work so that we can reach a solution in April. What remains ahead are difficult decisions,” he told the Greek premier.
He also said he agreed with what Tsipras said on the Greek economy. “The EU must not be divided. Because even Germany, which has a strong voice, will not be heard and will not be able to face economies such as China, the United States or Russia,” he said.
Gabriel is on an official two-day visit to Athens. During his visit, he is scheduled to have a working dinner with the prime minister on Wednesday night and then a series of meetings with President of the Republic Prokopis Pavlopoulos on Thursday. The talks during the visit are expected to focus on the migration and refugee crisis. He will also visit the gallery that is to exhibit works of art in the ‘documenta 14’ art exhibition taking place in Athens and Kassel, Germany.
Source: ANA-MPA