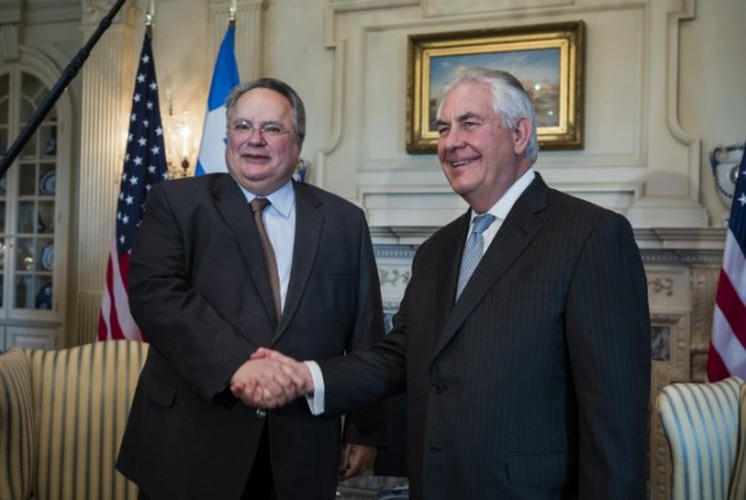 Greece’s role in the stability and security in Southeast Europe and Turkey’s “nervousness” were discussed in a meeting between Foreign Minister Nikos Kotzias and U.S. Secretary of State Rex Tillerson in Washington D.C. on Monday.
Asked by journalists after the meeting, Kotzias said Tillerson “wanted our analysis on how there can be stability and security in the region, which forces are active and how.”
Concerning Turkey, the minister said he discussed “Turkish nervousness” and explained Greece’s position on the importance of security and stability in the Eastern Europe and the Balkans.
The two sides also discussed ongoing energy projects in Greece with Kotzias noting the importance Greeks place in turning the country into a regional energy hub. He then mentioned other infrastructure projects such as roads and railway networks. “The energy, railway and university networks are for us, above all, networks of stability [networks] that produce economic profit,” he told journalists.
Kotzias said the Cyprus and Macedonia issues were not discussed, but he spoke generally about the instability in Greece’s northern neighbors and Greece’s efforts to stabilize them. Cyprus will be discussed in a later meeting with National Security Advisor, Lt. Gen. H. R. McMaster, he added.
Asked about the recent tension between the Netherlands and Turkey, the minister said “these things happen because Turkey is trying to transfer its nervousness to third countries.”
The minister is on a two-day visit to the U.S. capital for meetings with Tillerson, National Security Advisor Lieutenant General H. R. McMaster, representatives of the U.S. administration, members of Congress, representatives of the academic community, and Greek-American organizations.
[Source: ANA-MPA]