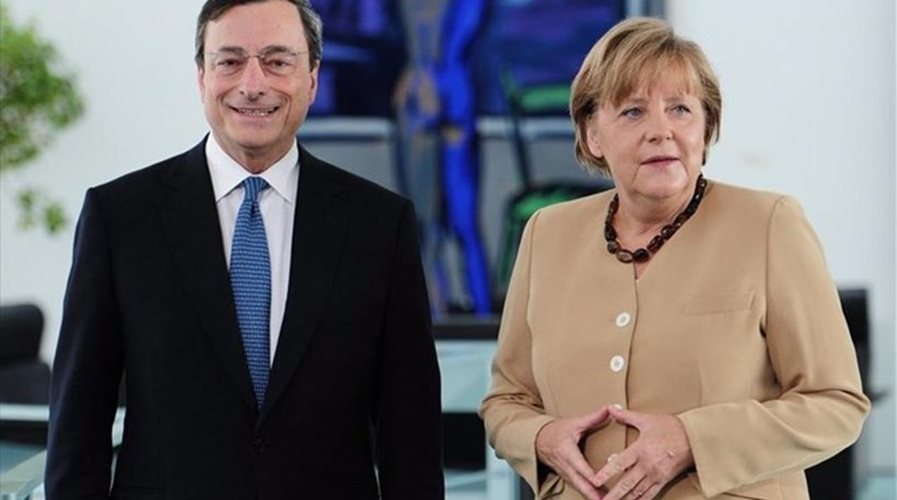 German Chancellor Angela Merkel has taken the initiative to help Greece enter the European Central Banks’ quantitative easing (QE) program, provided that Athens agrees to implement fiscal measures amounting to 2% of GDP, a Kathimerini report says.
According to the report, the German chancellor met with ECB President Mario Draghi and urged him to allow Greece in the QE program, meaning that ECB would buy state bonds, thus providing liquidity to Greek banks. Merkel took the initiative despite the difference in opinion with German Finance Minister Wolfgang Schaeuble. Her purpose is that creditors can provide a clearer description of medium-term measures to alleviate the Greek debt, as soon as Athens agrees with the package of measures creditors propose.
Draghi had made it clear that the accession of Greece to the QE program requires the  completion of the bailout program evaluation and the agreement on medium-term debt relief measures.
The report further says that in the recent meeting between the German chancellor and IMF Managing Director Christine Lagarde, it was agreed that the medium-term debt relief measures suggested by European institutions would be clearly defined and they would apply after the end of the bailout program, in mid-2018.
The Merkel plan is that Greece and lenders reach a staff level agreement first and then Athens proceeds with legislating the required measures, using the concrete debt relief measures as the “carrot.” This would allow Greece to enter the QE program and convince the IMF to participate financially in the Greek bailout program. The German chancellor hopes that the whole process could be completed by June at the latest.