On Tsiknopempti All of Greece Eats Grilled Meat 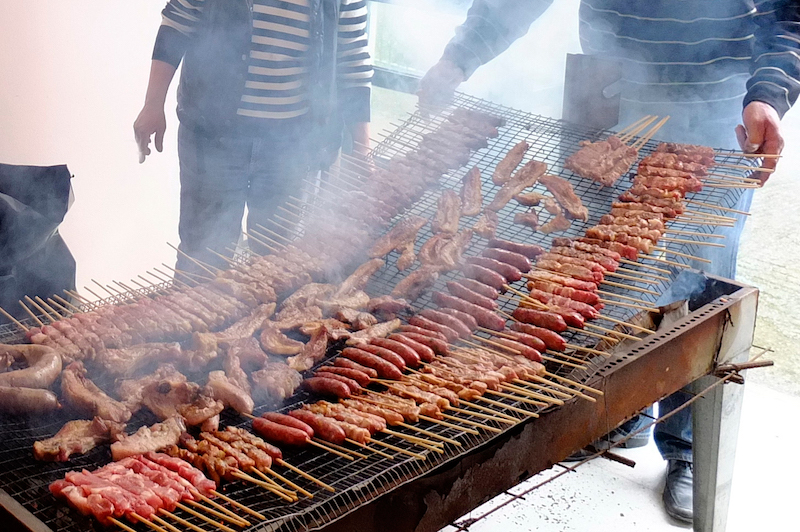 Today, Thursday, “Tsiknopempti” is here and all over Greece everyone is eating meat.
Tsiknopempti marks the official start of the carnival festivities. The day is celebrated on a Thursday and consists of the words “tsikna” (smell of meat on the grill) and Pempti (which is Greek for Thursday).
According to the Greek Orthodox tradition, the people who await the forty-day fast before Easter and follow the weekly fasts of Wednesday and Friday, have this particular Thursday to eat as much meat as they want and to party, right before the holy days begin.
The name of “Tsiknopempti” originated from the fact that on the particular day, in many areas across Greece, people used to melt the fat from pigs, while groups gathered at homes to barbecue meat. The smoke and the smell of grilled meat from households that could afford meat, led to naming the day “Tsiknopempti.”
The custom is said to be originated in the Bacchic feasts of Ancient Greeks and Romans, that survived with several changes until the Christian years. The eating and drinking of this Thursday, remind of practices that are related to Earth’s euphoria and that are combined with the Christian tradition, that prepare the faithful ones for the Easter fast.
In the older days, aside from putting meats on the grill, the tradition also dictated dressing up and teasing. In the villages, people walked around in groups going from house to house, knocking on doors and asking for a treat and some wine, which was consumed on the road. The people who offered the wine and treat, also had to leave their homes, and join the group of revelers to party along. The custom also included “minor damages” in the outside of the houses, as the celebrants knocked down flower pots to spill the dirt, smeared their faces and partied on until the next morning.
But how much meat do Greeks eat the other 364 days of the year?
In earlier times, eating meat, or rather affording to eat meat, was a sign of wealth. Meat consumption in Greece started soaring in the 1970s after the middle class in Greece became predominant, with Greeks eating a lot more meat than they were eating in the past.
Today, economic crisis aside, Greeks don’t eat that much meat as an outside observer would think. It appears that the traditional Mediterranean diet is still strong and Greeks belong in the group that eats less meat than in most European countries.
Central and northern Europeans, but also Spaniards and Italians, seem to enjoy meat much more than the average Greek. Respectively, the British also seem to have a particular weakness when it comes to meat eating.
On the world map, a total of seven European countries are in the list of 20 in which people eat a lot of animal flesh. The U.S. comes first in meat consumption, with an average of 120 kg / year per citizen and Kuwait coming close with 119.2 kg per year. Citizens of Luxembourg and Austria eat more than 100 kg / year (107.9 and 102 kg respectively), followed by Spain with 97 kg and Denmark (95 kg).
In Greece, despite the fact that there is a souvlaki shop on almost every corner, people eat 74.8 kg per person per year, much less than in Western Europe.
The British Telegraph has prepared an interactive map on which the average “per capita meat” consumption in kg for each country is depicted.