Government Wants 'Political Solution' for Program Review at Next Eurogroup 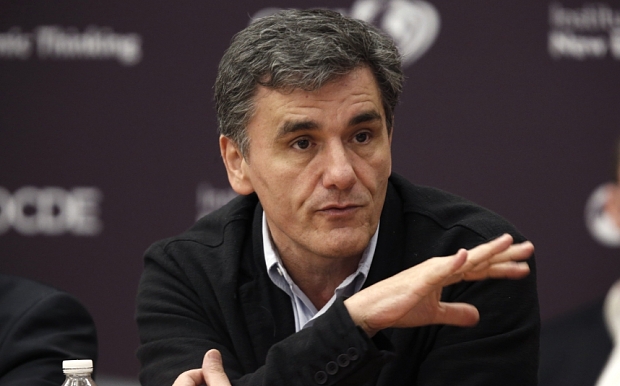 Greece wants to achieve a “political solution” on the whole package of measures (reforms, primary surpluses, mid-term measures on debt) negotiated with its lenders at the Eurogroup on February 20 and will figure out the details later, Finance Minister Euclid Tsakalotos said on Monday in an interview with ANT1 TV station.
The minister denied media reports that Athens has been handed a 48-hour ultimatum from the institutions to respond to their proposals, adding that EU financial affairs chief Pierre Moscovici and Eurogroup President Jeroen Dijsselbloem are “sincerely trying to contribute” to a comprehensive solution for the country.
Asked about the government’s “red lines” in the talks, Tsakalotos said it is “the people in the workforce” whom the government wants to help once economic recovery returns.
He said the European Commission and the European Central Bank (ECB) agree with Greece’s view that it is irrational to ask for new measures when revenues are exceeding the targets. “However, they are trying to maintain a balance between the Greek position and that of some Eurozone countries which are adamant about the IMF’s involvement in the program,” he said.
“We are not only negotiating on the tax-free threshold, but also for positive measures,” he said when asked about specific points being discussed adding that the delays in the talks take place because “you must hold back on certain things until the others show their cards.”
Asked why Prime Minister Alexis Tsipras said in a recent interview that the government wouldn’t sign any more measures, Tsakalotos said the prime minister has to maintain the toughest line possible.
(Source: ANA-MPA)