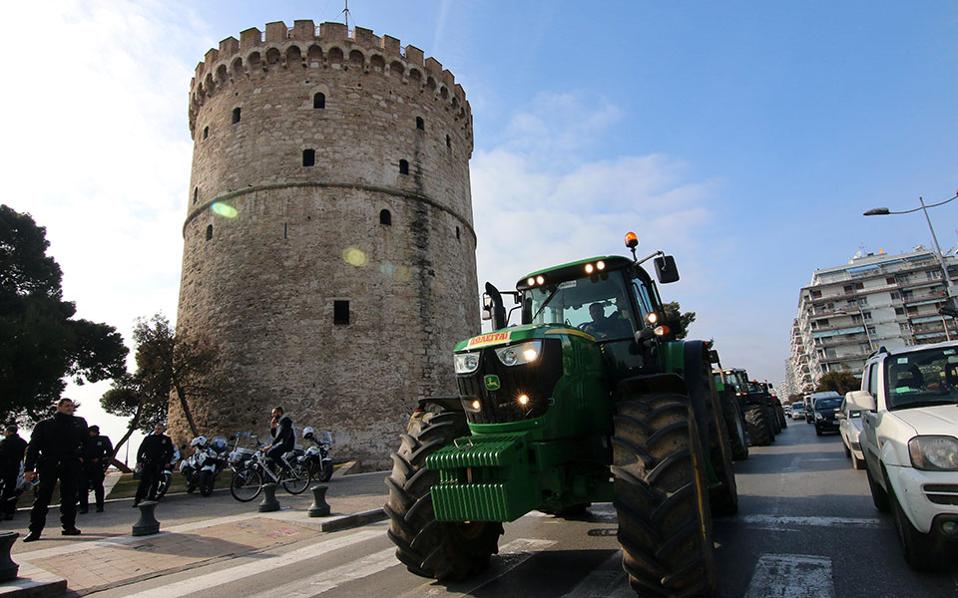 Almost 300 people from the agriculture industry across Greece gathered together symbolically outside the Thessaloniki International Trade Fair on Thursday, to send a “political message” that they are present and will be monitoring developments relating to their businesses.
The rally was organized by the National Coordinating Committee of Farmers, Breeders and Fishermen and shortly after 4:30 p.m. the participants cut a ribbon, “inaugurating” the 10th International Exhibition of Livestock and Poultry “Zootechnia.”
Minor tensions occurred at the south gate when farmers and livestock breeders attempted to enter the premises but were blocked by police. Meanwhile, in the center of Thessaloniki, 30 tractors were mobilized as protesting farmers made their way from the Derveni roundabout reaching the YMCA Square. The road was blocked for a short period but traffic was restored at 3:30 p.m. when the tractors lined up at the side of the road opening two lanes.
“We came here with our tractors, from the areas Lagada, Liti, Melissochori, Forest and Assiros, of Thessaloniki to protest in hopes that the government, as well as the other parties will hear us,” said the president of the Melissochori Cooperation, Theo Chatzitomaris,
Moreover, speaking to ANA-MPA, Drama farmer, Chris Godias, a member of the Panhellenic Coordinating Committee of Farmers, Breeders and Fishermen said that their action will continue, possibly by organizing a rally in Athens.