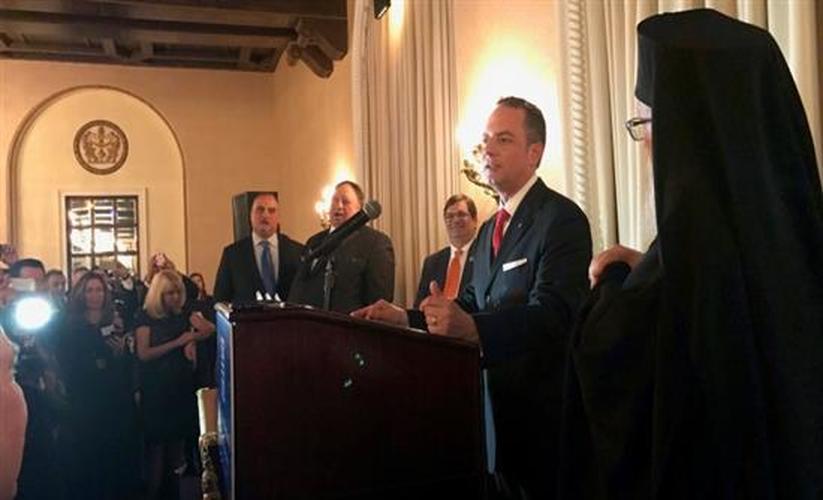 White House Chief of Staff Reince Priebus on Thursday praised the Greek Orthodox community and promised that the issue of religious freedom in Turkey will be a concern of the new U.S. administration.

Priebus spoke on the eve of the inauguration of the 45th U.S. president Donald Trump and accepted an award from the Greek Orthodox Archdiocese and Archbishop of America Demetrios for the recognition of his services, according to a Real.gr report.

“The Greek community, the Orthodox community, starting with the Archdiocese, Father Alex, the Patriarchate Archons, my good friend, my uncle and second father John Catsimatides who put me under his wings and said “yes” every time I called him on the phone. This group of people in this room are family. You helped save the Republican Party. All of us here in this room are not here by chance but because God brought us together in this room. Nothing happens if it is not God’s will. Now we must take the opportunity that God has given us to achieve the goals of the new president to make this country great again,” Priebus said.

Referring to the issues of the Patriarchate and religious freedoms, Priebus said: “Religion, Constantinople and the recognition of the difficulties of the Orthodox Church will be a concern in the White House… You longed to see the day that the U.S. President will appear in church in Istanbul. There is only one symbol for the Orthodox Church, but also for people of faith around the world,” according to the Real.gr report.

In closing, Priebus talked about his roots and favorite grandfather, Hercules. “I do not think I would be here if it was not for my grandfather. His name was Hercules, and from him I got my name. And he was a man whom I admired more than anyone else in my life. I do not know exactly how all this happened, but for you out there who remember your grandparents for any reason, [I admired him] for anything he did, his notes, papers, routines, I just wanted to be like him. As a child, the man whom I admired the most, my grandfather loved a place from which he came from, and this made me proud that I am an American. And I will never forget that.”

The event was attended by Minister of Digital Policy, Telecommunications and Information Nikos Pappas and Minister of Defense Panos Kammenos. The two ministers were invited to the official dinner hosted by Archbishop of America Demetrios, on the occasion of the inauguration of the U.S. President.

Also present were Deputy Assistant to the President George Gigicos and Congressman Gus Bilirakis. On behalf of the Greek government, Kammenos donated to the Archbishop a Greek flag from the outpost of Ro and a Greek shield. Kammenos also handed Priebus a copy of the sword of Alexander the Great as a gift to President Trump.

Among the guests were Senators, Members of the House of Representatives and officials of the new Trump Administration, Maroussi Mayor and president of the Athens Medical Association George Patoulis, and prominent members of the Greek American community.