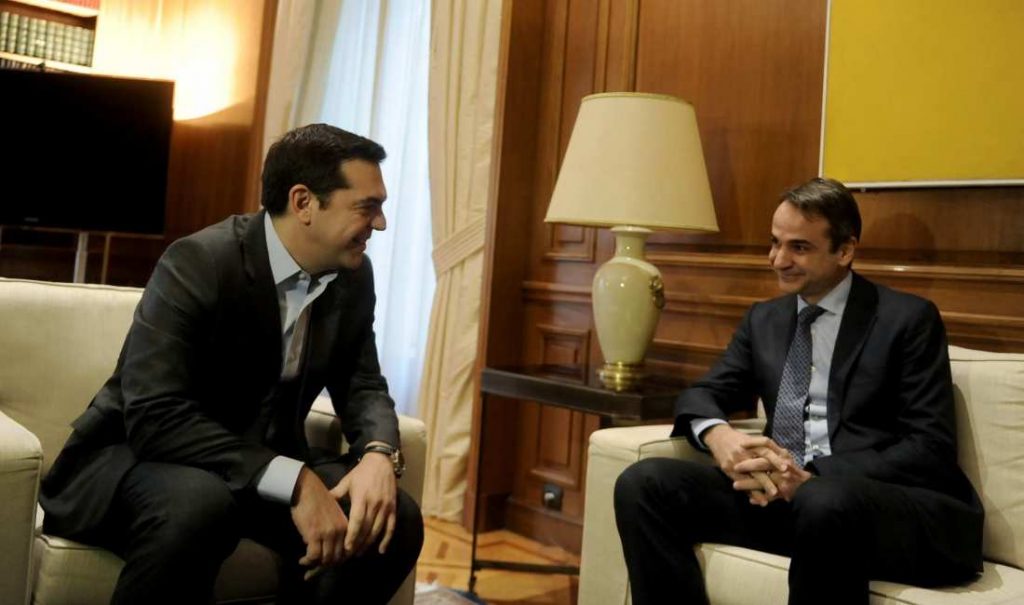 Greek Prime Minister Alexis Tsipras on Monday had successive meetings with party leaders in order to discuss strategy on the upcoming crucial talks regarding the Cyprus issue.
At 10 a.m., Tsipras met with main opposition leader Kyriakos Mitsotakis. The New Democracy chief stressed that there cannot be a solution with occupation army forces and guarantees. This is also the government position on the issue.
At noon, the prime minister discussed the national strategy with Democratic Coalition leader Fofi Gennimata, who said that she agrees with the national strategy, noting that it is up to Cyprus to decide on its future and Greece to support that decision.
At 2 p.m., Greek Communist Party general secretary Dimitris Koutsoumbas met with Tsipras and said that the only solution for Cyprus is one nation, not two.
At 5 pm, the prime minister met with To Potami chief Stavros Theodorakis who stressed the need for the National Security Council and the unity of political forces in such crucial issues.
Tsipras also met with Centrists Union chief Vassilis Leventis and junior coalition partner leader, Panos Kammenos of the Independent Greeks (ANEL).
Meanwhile, Cyprus President Nicos Anastasiades and Turkish-Cypriot leader Mustafa Akinci began a three-day series of talks in Geneva on Monday. The talks between the Greek Cypriot and Turkish Cypriot sides will culminate with a multilateral meeting with the participation of Greece, Turkey and the United Kingdom on January 12.
Greece also wants the European Union and UN Security Council to participate in the multilateral meeting.
Οn Tuesday Tsipras will meet with President of the Republic Prokopis Pavlopoulos to discuss the Cyprus issue. The meeting will take place at 1 p.m. at the Presidential mansion.