Gov't Sources: Athens in Constant Communication and Coordination With Cyprus Over Negotiations 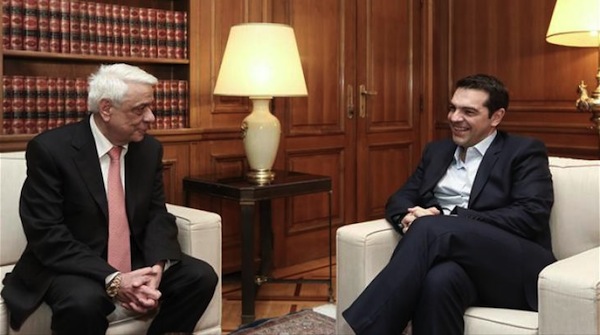 Greek President Prokopis Pavlopoulos is likely to meet with Prime Minister Alexis Tsipras next week to discuss the Cyprus issue.
According to sources, the meeting will possibly take place on Tuesday after Tsipras’ meeting with political leaders and before his visit to Geneva for the critical conference.
“We are not going to face the Turkish stance retreating from our principles,” nor “will we adopt the Turkish reason of cultivating nationalism for domestic interests,” government sources told the Athens-Macedonian News Agency (ANA).
According to the same sources, Greece, in constant coordination with Cyprus, is committed to achieving a just, sustainable, solution, based on UN Security Council resolutions, with elimination of the guarantees and the withdrawal of the occupying troops. “We will not proceed with illusions, given the timeless Turkish stance on Cyprus and the recent developments in the country. However, we will not start the talks on blame game rhetoric,” the sources added.
“We will remain at the negotiation table as far as it regards the issues of security and the guarantees in which we are involved for as long as necessary,” the government underlined.
Source: ANA-MPA