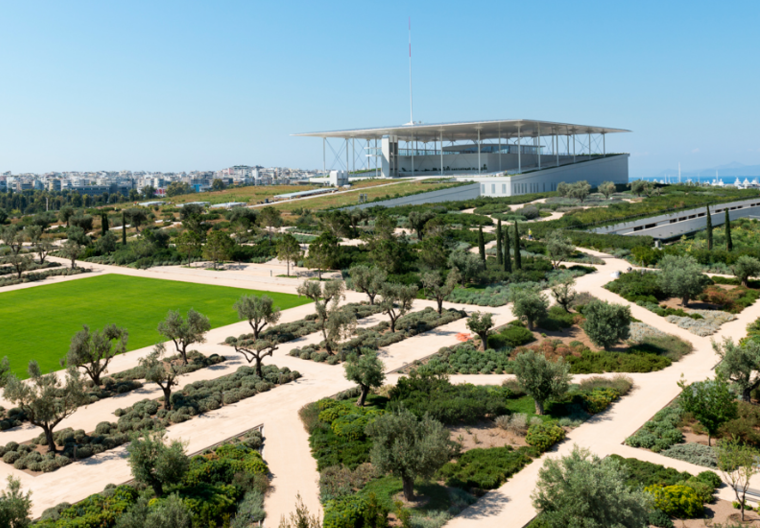 The Stavros Niarchos Foundation (SNF) has announced in the following press release that it will be inviting the Greek State to take over the operation of the newly built cultural center located south of Athens.
Ten years after the SFN initially announced its intention to proceed with a large-scale grant for the creation of the Stavros Niarchos Foundation Cultural Center (SNFCC), the moment has finally arrived: the SNF invites the Greek State (GS) to accept delivery of the project and begin operating it for the benefit of society at large.
On December 29, 2016, the SNF will extend the official invitation to the GS, in order for the latter to certify the completion of the construction works and to initiate the delivery process of the SNFCC to its final owner, the Greek society, through the entities representing which it represents.
Along with the delivery to the GS, the relocation process of the National Library of Greece (NLG) and the Greek National Opera (GNO) to the SNFCC also begins. Under the current timetable, the process is expected to be completed by October 2017.
The two institutions will continue to expand their actions at the SNFCC and will also continue to be supervised by the competent Ministries of Education and Culture, respectively.
On February 23, 2017, when the official delivery ceremony is scheduled to take place, the SNFCC—a contemporary and lively house open to all—will hand over the keys to its real owners, its present and future visitors.
Andreas Dracopoulos, Co-President of the SNF stated: “We are proud to deliver the SNFCC to its final owner, the Greek society, with the highest standards and expectations. With the start of the New Year, a new era begins, both for the project and for all of us at the Foundation. We will now be able to remotely witness the growth of the SNFCC and contribute to it, to the best of our abilities, alongside our other grantmaking around the world. Apart from being the Foundation’s largest single grant, the SNFCC is a dream come true, something we wish to share with all those already embracing it with their presence.”