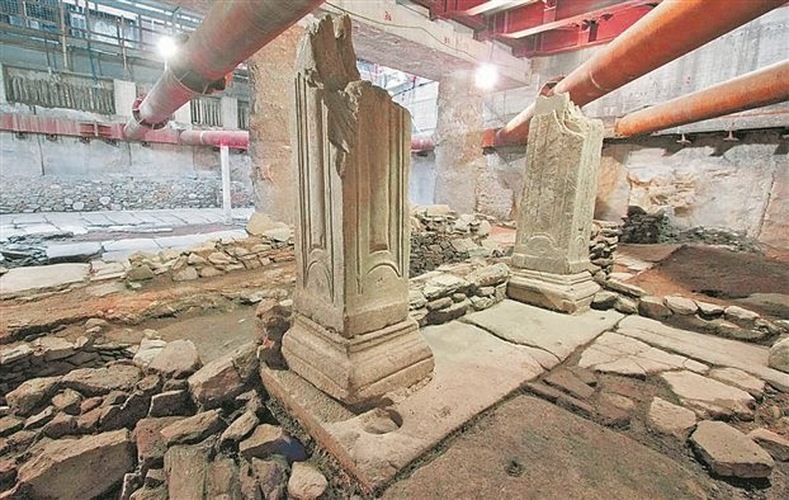 The Council of State on Thursday judged the removal and subsequent return of the antiquities discovered during the construction of the Thessaloniki’s underground metro to Venizelos station to be fully legal and constitutional, dismissing objections raised by the Thessaloniki municipality.
The municipality resorted to the court to block a 2014 culture ministry decision for the construction of the metro station around the antiquities, which are to be preserved and placed on display inside the station. To this end, the ministry instructed that the remains be removed and stored, then returned to their positions inside the station.
The Thessaloniki Municipality claimed that the ministerial decision violated the constitutional principle of proportionality, since the “worst solution for the protection of the cultural environment was selected, which results in the permanent disappearance of the specific historic monument as a complete whole.” It also argued that the decision violated laws on the protection of antiquities and cultural heritage.
It failed to convince the court, however, which ruled that the ministerial decisions were legal and in line with the constitution, since the ministry had previously examined all proposals, including that of the municipality. The final decision required that the greater part of Venizelos station be redesigned, structurally and functionally, so that the remains discovered could, in the most part, be restored to their original position, the court noted.
It also pointed out that the Central Archaeological Council had approved the removal for the protection of the remains but also in case deeper finds were revealed, while ruling that the studies for the protection, removal and storage of the finds were legal.
Work on the Thessaloniki metro led to the discovery of remains dating from the 4th century and the early Byzantine years (600-700 AD) at the corner of Egnatia Street and Venizelos Street in the city, at a depth of about six meters and over an area of 1,600 square meters. They included sections of a city with large central streets, public spaces and buildings, as well as a section of Thessaloniki’s main road.
Source: ANA-MPA