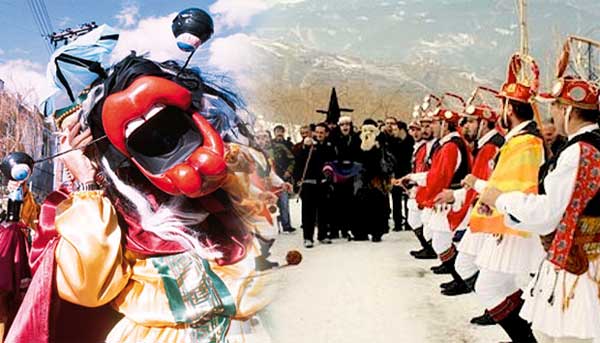 Christmas time is not merely an important celebration for Christians and Greeks, but rather bears a deeper and more complex meaning evident in Greek traditions, since several differing customs are an integral part of this annual celebration.

Greece is full of such customs coming to life during Christmas time. Some of them are more widely known than others, but there are some that are far more unusual and odd. 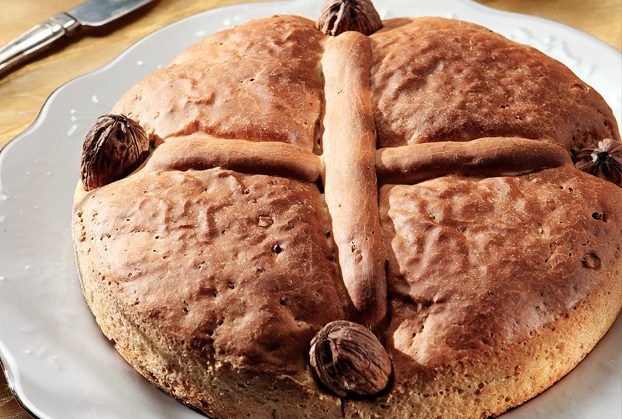 Christopsomo
On Christmas Eve, the housewife bakes Christopsomo or Christ’s Bread (Greek Christmas Bread), a centuries-long custom, which is a sweet yeast bread characteristically decorated with the symbol of the cross embossed on the loaf using two dough strands that intersect and divide the bread into four segments.
Other decorations carved around and on the bread highlight the different beliefs and wishes of the faithful. On Christmas Day, the head of the family takes the loaf, makes a cross blessing upon it, cuts it into pieces and offers it to each member of the family and others present at the Christmas dinner (Some say this is a symbolic representation of the Holy Communion, just like Jesus Christ had given the bread of life to all mankind.) 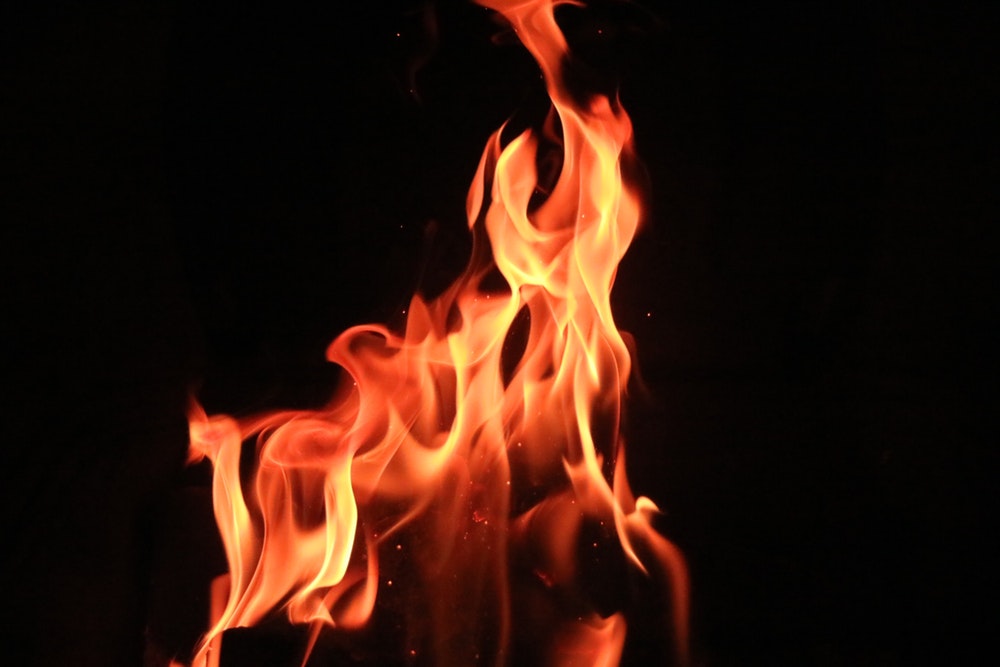 Marrying Fire
On Christmas Eve, several regions across Greece have the tradition of “marrying” fire. They take a tree branch with a feminine name, e.g. cherry (kerasia is a feminine noun in Greek) and a tree branch with a masculine name, e.g. plane (platanos is a masculine noun in Greek) and then the head of the family says out loud “I marry thee fire for the sake of the housewife.”

Kalikantzaroi
According to Clement A. Miles’ work on Christian and Pagan Traditions and Rituals, the Kallikantzaroi custom varies from region to region, but in general these mythical creatures are half-animal, half-human monsters, black and hairy, with huge heads, glaring red eyes, goats’ or asses’ ears, blood-red tongues hanging out, ferocious tusks, monkeys’ arms, long curved nails, and commonly they have the feet of some beast. “From dawn till sunset they hide themselves in dark and dank places but at night they issue forth and run wildly to and fro, rending and crushing those who cross their path. Destruction and waste, greed and lust mark their course.”
When a house is not prepared against their coming, “by chimney and door alike they swarm in, and make havoc of the home; in sheer wanton mischief they overturn and break all the furniture, devour the Christmas pork, befoul all the water and wine and food which remains, and leave the occupants half dead with fright or violence.” Many like or far worse pranks do they play, until at the crowing of the third cock they get them away to their dens. The signal for their final departure does not come until the Epiphany, when the “Blessing of the Waters” takes place. Some of the hallowed water is put into vessels, and with these vessels and incense, the priests sometimes make a round of the village sprinkling the people and their houses.
Besides this ecclesiastical purification there are various Christian precautions against the Kallikantzaroi – e.g., marking the house-door with a black cross on Christmas Eve, the burning of incense and the invocation of the Trinity – and a number of other means of aversion: the lighting of the Yule (Christmas time) log, a large log of wood called a skakantzalos, the burning of something with a strong smell(sometime the Greeks will also burn old shoes, the smell of which keeps the wicked elves away), and – perhaps as a peace-offering – the hanging of pork-bones, sweetmeats, or sausages in the chimney.
In Lemnos, after the second day of Christmas, locals start slaughtering piglets and when nighttime falls they start dancing around the city.
In Florina, on the 24th and 25th of December, people light fires in different quarters of the town and the inhabitants walk from fire to fire singing Christmas carols. 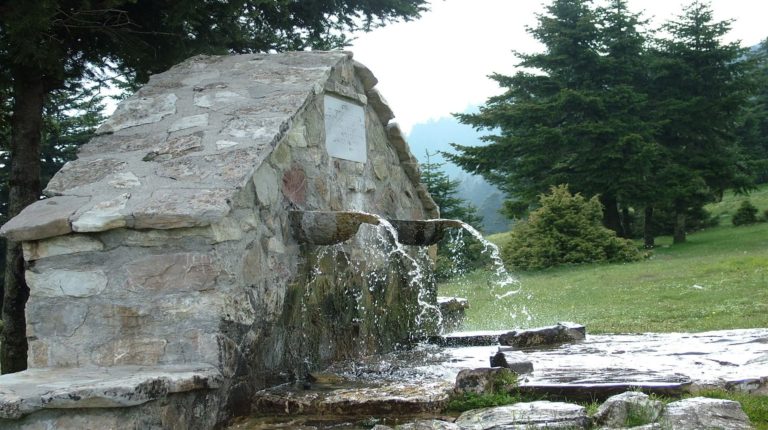 The Feeding of the Fountain
The ‘Feeding of the Fountain’ is another odd Christmas tradition found mostly across Epirus. In many villages on New Year’s Eve, young women take their empty pitchers and go to the nearest fountain in order to fill them up with water. Along the way to the fountain, the women keep totally silent and thus the water is called “silent”.
The strange detail about this custom is the women carry with them different edibles, such as butter, wheat, cheese, honey, etc. In this way, the women try to humor the fountain, at the same time saying wishes for prosperity and health. It is said that the first woman who gets to the fountain is blessed with lots of good luck for the rest of the year.
In the villages of Arta, whoever goes to wish to their neighbor, or children who wish to take the blessing from their parents, must hold in their hands a small branch of lit wood making scrunching noises. 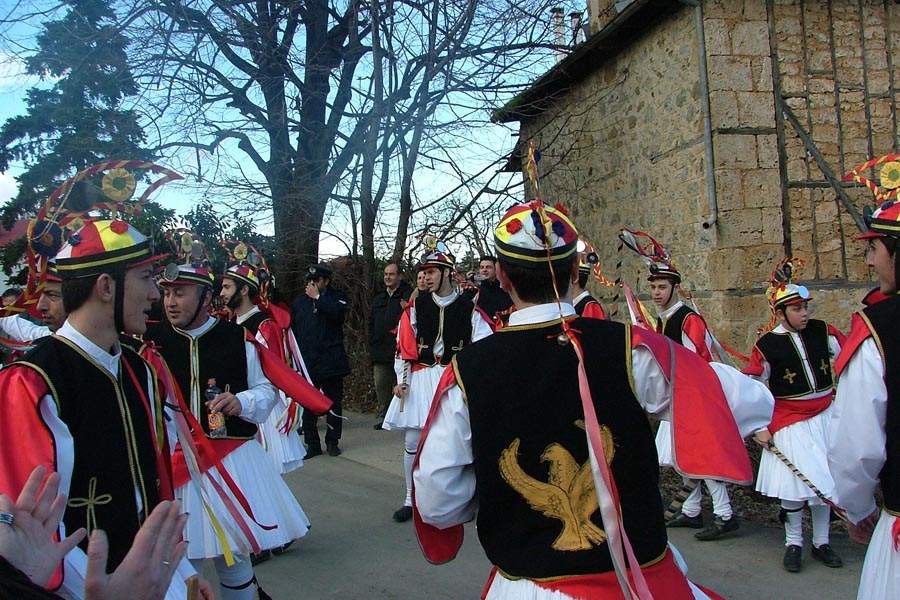 Momogeroi
In Northern Greece, people get dressed in animals’ carcasses (wolves, goats, etc) or carry swords with them while visiting all the nearby villages singing carols and gathering small gifts. These men are called Momogeroi, Rogkatsia or Rogkatsaria, and should two different groups of them meet, they start a “war” until one of them surrenders.
Weird or not, all customs make Christmas in Greece the most delightful time of year.

Record Number of Coronavirus Patients on Ventilators in Greece Monday