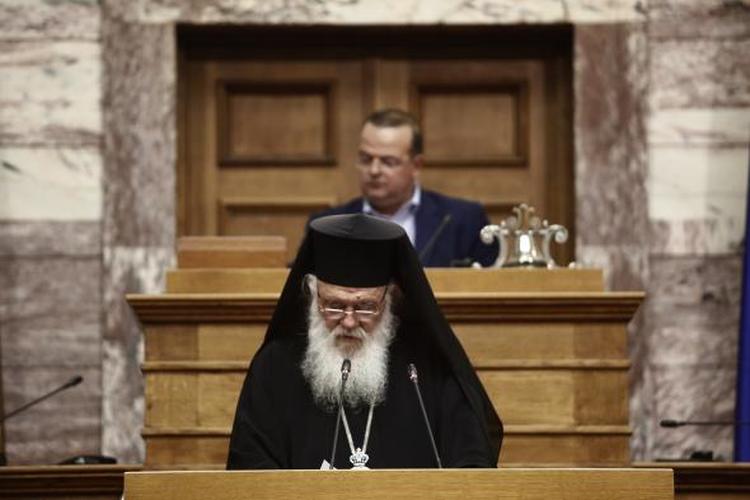 Archbishop of Athens and All Greece Ieronymos said on Tuesday that the country is like a ship that is sinking and hinted that the administration is partly to blame.
Archbishop Ieronymos spoke in parliament, after he was invited to participate in a special committee. He talked about the recent rift between the Church of Greece and the government when the previous education minister Nikos Filis tried to change religious lessons in Greek schools. It is alleged that Filis was ousted from the ministry because of his stated belief that Church and State should be separated.
“We all went through childhood diseases and have (political) obsessions, but this is not the time for such things. The ship is sinking and no one will be saved, neither the captain nor his cabin boy,” the Archbishop said.
He then referred to new Education Minister Costas Giavroglou who invited him to work together “to do many things” for Greek education. “I told the minister that if the country goes well, we will do many good things, but if it doesn’t go well then we can’t do anything,” the Archbishop said.
On the Church-State separation, Ieronymos was adamant saying that this term is never used in the Church of Greece. He said that when he is asked to comment why many of the cabinet members refused to take the religious oath when taking office, he said:
“Whoever wants they can leave the Church. If they regret and want to return, we’ll be here as the father who waits for his son and forgives him,” he said.
On the issue of Church property, Archbishop Ieronymos said that there have been many times that the State has not been honest towards the Church and asked that Church property that has been taken from the Church at various times should be returned. Church property that will be returned from the State will be used for charity work, he said.

The Ancient Greek Sanctuary of Samothrace