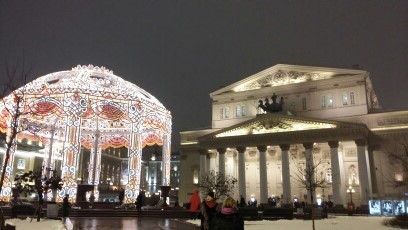 This month Athens audiences will have the opportunity to experience a little of the glamour of Russia’s Bolshoi Theatre and its legendary ballet, through the exhibition The Magical World of the Bolshoi Theatre that opens at the Athens Concert Hall on December 19.
The exhibition features some of the original costumes, props and sets used in the Bolshoi’s performances, worn by some of the world’s foremost ballet dancers and performers. Among them is the costume used by prima ballerina Maya Plisetskaya for Anna Karenina or the signed ballet shoes that Ekaterina Maximova wore in the Nutcracker.
One of the events organized for the Greece-Russia Year 2016, the exhibition was put together by the culture and sports ministry in collaboration with the Athens Concert Hall and Bolshoi Theatre Museum.
The official opening is on December 19 and the doors open to the public from December 20 until February 12. The exhibit will be open between 10 a.m.-2 p.m. on Mondays and 5 p.m.-9 p.m. on Tuesday-Sunday and closed on December 24, December 31, January 1-3 and January 6.
There is an entrance fee of 5 euros (3 euros reduced).
Source: ANA-MPA