Eide: More Meetings Are Being Planned to Resolve Cyprus Issue 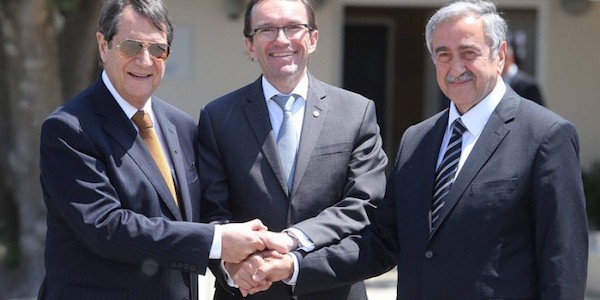 U.N.’s Special Adviser on Cyprus Espen Barth Eide said on Friday he strongly favors a top-level meeting between Prime Minister Alexis Tsipras and Turkish President Recep Tayyip Erdogan on the system of guarantees, which he recognized is one of the hardest to resolve.
“I very strongly support the idea of a meeting at the highest level between Greece and Turkey specifically on this issue. I have been in contact with both governments and I’m trying to inspire this to happen. The purpose will not be to resolve all questions, but to have a better understanding of what we have to do and what can be achieved at the (Cyprus) convention,” Eide told journalists after a meeting with Foreign Minister Nikos Kotzias.
“This issue is thorny but we have to solve it in order to allow our friends in Cyprus to be able to reunify, which is clearly a desire held by the two leaderships but also in my view by a significant silent majority of people who would like to see this happening,” he added.
More Meetings Planned:
Asked to specify, he said a meeting between Greece and Turkey should take place before January 12 and noted that both sides show a will to meet. He said technical issues still needed to be resolved, such as where to meet.
Commenting about placing an end date on the Cyprus convention, the U.N. official said the meeting between the two Cypriot sides will start on January 9, but there is no ending date, as it will depend on the progress made. “If necessary, there might be a pause and then we will return to the meeting,” he said.
Looking Forward:
Eide described how talks restarted between the two sides after the collapse of the negotiations in Geneva last month.
“After some difficult days in Cyprus, last night we had a working dinner with the two leaders, Anastasiades and Akinci where they not only overcame the disagreement that had led to the problem but also agreed on the way ahead, all the way to the conference on Cyprus,” he said.
“It was a very moving moment yesterday because I could see how these two leaders were visibly very happy that they were able to move forward, because they are so committed to finding a solution to this 42-year-old problem,” he said describing the working dinner in Nicosia.
“They are of course very much aware that there still issues to be solved; nobody thinks it’s easy. But the strategic alignment on all those issues that we have been discussing is now so high that the remaining outstanding issues will be solved. I think so and they think so,” he said.
The Plan in the Making:
According to the agreed framework, on January 9, the Cypriot delegations will meet in Geneva to try to come to an agreement on the remaining issues on the table and from January 12 they will be joined by the guarantor powers, the EU and if need be other players who will be invited to join the conference, “So it is one conference but it becomes international on the 12th,” Eide explained.
Eide said one of the purposes of his visit to Athens was to inform the Greek government about this and he will do the same in Ankara.
He said that the Cyprus talks have now reached the phase where the two sides have to deal with the most critical issue which is security and guarantees, in which Greece and Turkey have very divergent views.
“Greece will like to see an end to the systems introduced in 1960…whereas Turkey will like to continue this arrangement. But conversations have been held on these issues…and the status of these conversations are such that there’s a way to go but we also have a better understanding on where potential compromises could be found. I will know more of this when I go to Ankara,” he said.
Asked what will happen if talks fail, the U.N. official said: “We are working for success. So I think it’s a very complicated issue right now, the purpose of this is to solve it and we’ll work towards that goal.”
Discussing the failure of last month’s talks, he said that although great progress had been made for 19 consecutive months, negotiations were interrupted and in the second round of talks the mood had changed.
Eide said it is expected to have problems because the two sides are working on more and more difficult territory.
“This is the first time in leaving memory that Cyprus leaders have negotiated territory directly. Previously, my predecessors, for instance Kofi Annan, had to propose a map to the Cypriots because they were not able to negotiate it. This time we will not repeat that from the UN. We are not writing a single sentence. Every sentence, every word, every coma is written by Cypriots. We are facilitating we are not doing it for them,” he said.
“In territory you have pain and suffering. You have mass losses. People who lost their land, their house, their livelihood, but also we have current pain, in the sense that people are living there now and wondering what will happen to their current life,” he explained, noting it is a very different problem from that of the composition of the governmental body, which he described as more of a “political elite” problem.
“Despite all that, we are not doing that badly. I think that they are almost there when it comes to a broad understanding of the territorial issues and the rest will follow. So I repeat without in any way belittling the outstanding issues, I think the strategic alignment is there on all issues apart from the security guarantees which is where we now have to put much effort.”
(Source: ANA-MPA)