A Sad Picture of the Greek Prime Minister in Havana 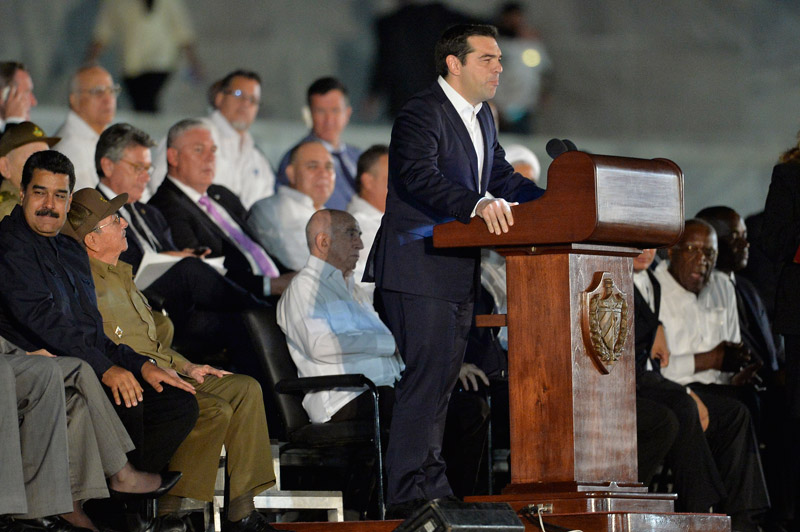 For most Greeks, the picture of Prime Minister Alexis Tsipras amid only five state leaders from Latin America and Africa paying homage to the late Fidel Castro in Havana was truly sad. And even more sad was the fact that he was there claiming that he represents Greek people.
As Greece is, again, at a dangerous crossroads, its leader decided to leave behind the crucial bailout program review, the Cyprus issue, the Turkish provocations, the tensions over the refugee crisis and make a nice trip to Havana to pay tribute to the hero of his youth, the rebel “comandante.”
Tsipras was the only head of state of the so-called Western World. He was among President Nicolas Maduro of Venezuela, Evo Morales of Bolivia and Daniel Ortega of Nicaragua. Presidents of South Africa Jacob Zuma and Zimbabwe Robert Mugabe were also present. Not the ideal “company,” and certainly not a good picture of a prime minister who claims he wants to be a leader of a euro zone country on its way out of recession and into a growth path.
The timing of the prime minister’s trip couldn’t have been worse. With so many fronts open, a good leader would have stayed in Athens and dealt with the mountain of problems Greece faces at this moment, both internal and external.
First of all he would have replied to Turkey’s expressed claims of Aegean islets, or the dispute of the Cyprus flag. And to Albania’s challenging the Chameria region in Epirus. Or he could have taken some action on the migrant problem. Or speak with European leaders about the deadlock in the bailout program review. Or address the disgruntled Greeks who are buried under the tax avalanche and pension and wage cuts.
Yet, Tsipras did none of that. He chose to fulfill his teenage fantasy and speak at Havana’s Revolution Square and shout “hasta la victoria siempre” and talk of “heroic struggles” and “people’s victories” and few other catchphrases of the leftist good book.
At the same time, Tsipras wanted to address his fanatics at home. Those who still believe that he is the rebellious spirit, the bright hope of the Greek Left, the true idealist. He wanted to show them that he can shout all the leftist slogans with the best of them, speak for the people, show he cares for them.
Unfortunately for the idealists who put their faith on Greece’s youngest prime minister, he is none of the above. His actions prove he is an opportunist who would do anything to cling to power as long as he can; his two years in power have corrupted him; for him, power is an end in itself. He repeatedly slams neoliberalism — and went all the way to Cuba to prove it — yet at home he enforces the most neoliberal policies in order to get more loan money and stay in power.
Tsipras may believe he shares the same ideas with “El Comandante” as he referred to him. But as soon as he came to power, he betrayed all the ideals he was professing when in opposition. In July 2015, he betrayed all those who voted against austerity and followed by kicking out all his “comrades” from SYRIZA. So it is hypocritical to stand there, before the legend of Castro and say what he said.
For all the accusations of the West that Castro was just a dictator, one cannot argue that Cuba has a great public health system and a very good education system. Tsipras, on the other hand, did nothing for the Greek people, other than giving some handouts to the poor, which looked suspiciously like efforts to buy potential voters. Then he appointed all his cronies and their girlfriends and boyfriends in good positions in the public sector, leaving the national health system on the brink of collapse and education in worse shape than he found it.
Despite his fantasies, Tsipras has nothing in common with the late Castro. Tsipras’ eulogy for “El Comandante” reminds one of the saying, “If you are under 30 and you are not rebellious, you don’t have a heart. If you are over 30 and still rebellious, you don’t have a brain.” Unfortunately for Greece, the prime minister at 42 still believes he is a rebellious teenager in an ill-fitting suit. But, hey, still without a tie.