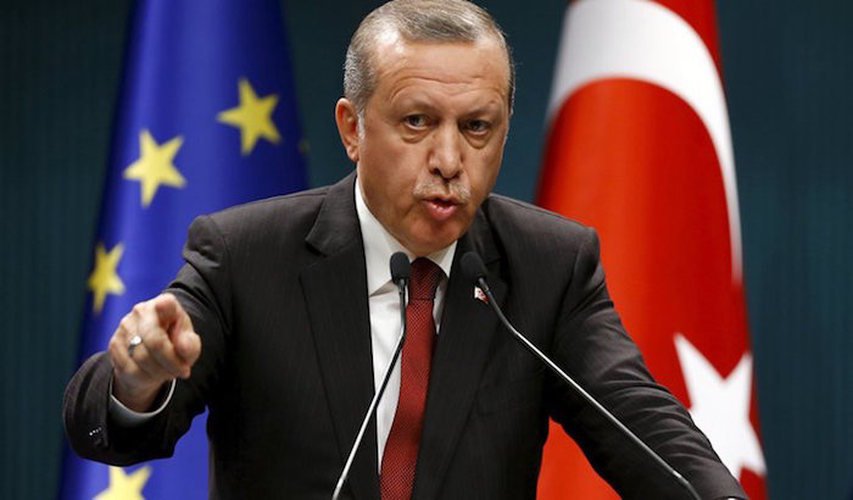 Turkish President Recep Tayyip Erdogan on Tuesday challenged the flag of Cyprus, showing unwillingness to solve the 42-year-old Cyprus issue.
The Turkish president spoke at the “7th Bosphorus Summit” on “world’s future and smart economy” and touched on the Cyprus issue.
“There, in Cyprus, there are ongoing talks. Continued delays. This is the tactic. You know what? They say “give us Cyprus and stay out of it.” Wait a minute! The blood of our fallen lies there,” said the Turkish president.
Erdogan questioned the legal rights of the Nicosia government, claiming that, “Without shame they go to the EU meetings with a flag that depicts the whole island. You cannot have such a flag. You are the Greek Cypriot administration of Southern Cyprus. To the north is the Turkish republic. That’s rude. In any case they will understand this,” he said.
The Turkish president spoke of the peace talks between the Greek-Cypriot and Turkish-Cypriot sides. He said he wants to see concrete steps taken on the Cyprus problem. “The other day the prime minister of Greece called me. They asked for a bilateral meeting, we say a polymeric meeting. We are discussing it. But this work should not delay. By the end of the year we need to get somewhere. But if things are like ‘both the soil and the administration is our own,’ then it doesn’t go anywhere.”