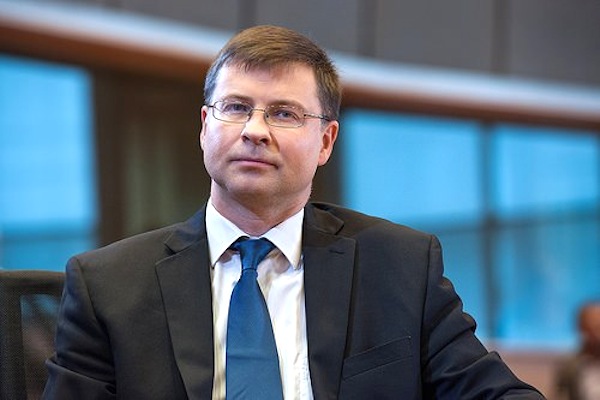 “We can expect the conclusion of the second program review in the foreseeable future,” European Commission Vice-President for the Euro and Social Dialogue Valdis Dombrovskis said on Monday in Brussels, stressing the “significant progress” that had already been achieved.
Asked on the possibilities of concluding the second program review before the Eurogroup meeting on December 5, he said that he cannot make predictions about when exactly this can happen, adding that the negotiations between the government and the institutions are well on track thus far.
He explained that the Commission is working closely with the Greek authorities in the framework of the second program review and stated that significant progress has been achieved. As he said, the Commission is evaluating the fiscal measures for 2017 and 2018 so that the medium term target for 3.5 percent of GDP primary surplus is met.
Regarding the structural reforms, he said that the negotiations continue with focus on labor market reforms. The vice president also said that some measures on the Greek debt will be discussed at the Eurogroup on December 5.
The Greek economic program and the second review will dominate the EuroWorking Group (EWG) that convenes on Monday, in Brussels.
According to eurozone sources, the Greek issue will be discussed at 9 pm (Athens time).
Source: ANA-MPA

Tax Havens: Why the G-7 Effort to End Them is Unlikely to Succeed

Over 80% of Covid-19 Cases on Crete From Delta Variant