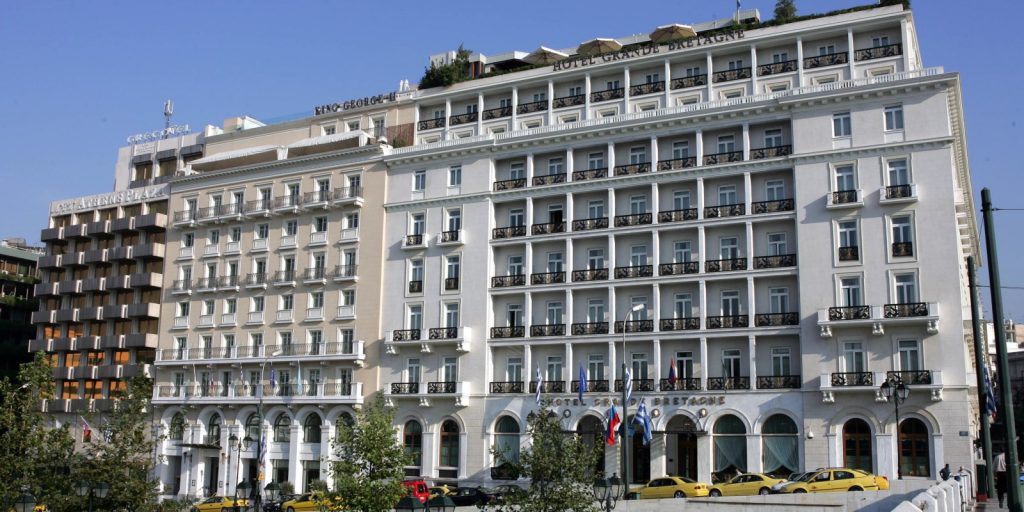 It was built less than 50 years after Greece won its independence and the modern Greek State was beginning to take form. It was built across the King’s Palace, and now stands across the Greek Parliament at Syntagma Square. Its guests witnessed some of the most important moments of Greek history. Grande Bretagne stands today as the most historical and most elegant hotel in Athens and Greece.
Now, from its windows you can watch the Evzones change guard, or the Parthenon on the other side. It is likely also that you will see angry Greeks demonstrating against the government by shouting at the parliament building and smell the occasional tear gas.
It was built in 1842 as a house for a man named Antonis Dimitriou, a wealthy Greek from Trieste, Italy. Athens was a small town at the time, not taken seriously as the newborn country’s capital.
In 1874, Stathis Lampsas, a Russian-born Greek whose ancestors had come from Kalavrita and was former cook for the King went into partnership with Savas Kendros, owner of the Grande Bretagne hotel on the corner of Karageorgi Servias and Stadiou, a block down from the hotel, and with an 800,000 drachma loan bought and restored the Dimitriou mansion and named it the Grande Bretagne.
Grande Bretagne was a luxurious hotel in a town where chicken still ran free in the streets and water shortages were common. In the beginning there were only two bathrooms to accommodate 80 beds, yet all the luxuries of the time were there, making it a luxurious hotel even by European standards. In 1888, after the death of Savas Kendros, Stathis Lampsas installed electricity in the hotel when Athens got its first generator.

The hotel was modernized along with the city and became even more luxurious. Grande Bretagne became a center of intrigue, where international spies passed information, alliances were made and broken, governments formed and torn down, businesses were planned. It’s ballroom was the center of ceremonies, and social gatherings.
With the establishment of the Hellenic Republic in 1924, the Grande Bretagne became the central meeting place for the Greeks and foreigners who were shaping the political, economic and social life of the country. The new wing on Panepistimiou was built in 1930 to accommodate presidents, kings and other dignitaries, symphonies and delegations that came to Athens.
During World War Two the Grande Bretagne was taken over by the General Staff and all the guests were asked to leave. But when Athens fell to the Nazis April 28, 1941 it became the headquarters of the Third Reich and filled with hundreds of officers. For three years the Nazis lived in the hotel with regular visits by Goering and Himmler. Rommel and Hitler even stayed here on the eve of the Soviet invasion of 1941.
Things changed drastically when the Germans left and the hotel became the headquarters of the British Expeditionary Force in the autumn of 1944. But instead of peace, a civil war broke out between the Greek army and the communist resistance who controlled most of Athens with the exception of the Grande Bretagne. The hotel became the scene of conferences between the government of George Papandreau and the British delegations headed by Harold Macmillan and later by Winston Churchill and Anthony Eden. The Grande Bretagne was a combination fortress and refugee camp with machine-guns set up at the entrance, windows and hallways.
The civil war ended in 1949 and in 1956 four more stories were added to the hotel. In the years to follow the Grande Bretagne witnessed numerous demonstrations, election rallies and military parades and military coups when the army tanks surrounded the parliament in April 1967. When the Junta collapsed in July 1974 it was at the Grande Bretagne where Constantine Karamanlis lived for four months while he formed the new government in his 5th floor suite and the same year Archbishop Makarios addressed the Greek people from a second floor balcony on his way back to Cyprus after his near assassination and the Turkish invasion and occupation of the island.
The Grande Bretagne suites have accommodated over 40 kings, queens and heads of state. This is where most international leaders stay to this day. The hotel maintains its high standards of elegance and luxury, as the gourmet food is served with fine porcelain and crystal and nineteenth century gold silverware.
In 2003 the Grande Bretagne underwent its most extensive renovations while maintaining its splendor, making it the best hotel in Athens.