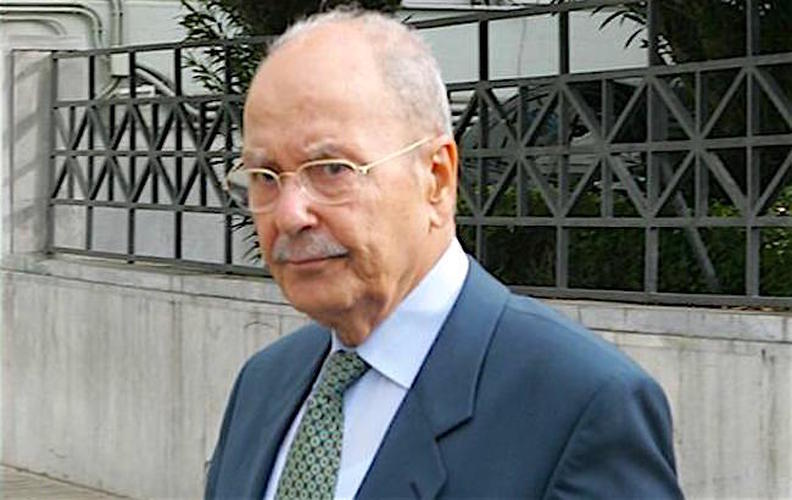 Former Greek president Kostis Stephanopoulos died at the age of 90 at Errikos Dynan private hospital in Athens following complications during a respiratory infection. The conservative New Democracy politician was rushed to the hospital on Thursday, November 17, and was immediately taken to the emergency ward in critical condition.
Doctors said he died at 11.18 p.m. on Sunday as a result of damage to multiple organ systems.
Errikos Dynan hospital released a statement concerning his condition on Friday. Sources at the time pointed to the former President’s critical state of health, bearing in mind the statesman’s age and previous health history.
Stephanopoulos, one of Greece’s most popular politicians, was known for his low-key profile and unifying approach. His gentlemanlike behavior did not stop him from getting his point across bluntly when necessary, such as the time that he held a dinner in honor of former U.S. president Bill Clinton on November 19, 1999. He referred to Greek-Turkish relations and the Cyprus problem, without touching upon the United States raids against Serbia. His speech, referred to “human rights”.


The great Greek statesman was born in Patras on August 15, 1926, and served two consecutive terms as President of Greece from 1995 to 2005.
A law graduate from Athens University, he practiced law from 1954 until 1974 as a member of the Bar Association of Patras. He entered politics in 1958 when he stood for election with the National Radical Union and was first elected as an MP for Achaia in 1964. He was re-elected for the same constituency for the New Democracy party in 1974 1977, 1981 and 1985.
In 1974, he was appointed Deputy Minister of Commerce in the government of Constantine Karamanlis where he served a number of ministerial posts during New Democracy party’s governance: he was Interior Minister from November 1974 to September 1976; Minister of Social Services from September 1976 to November 1977 and Minister for the Presidency from 1977 to 1981.
In August 1985, he withdrew from New Democracy party and created his own party, the Democratic Renewal (DIANA). As DIANA President, he was elected as an MP in 1989, until the party disbanded in June 1994. He was also a member of the renegade conservative group, Political Spring, in 1995.
During his tenure as president, he welcomed former King Constantine II to the Presidential mansion in 2004, the highest honor that the former king received since he was deposed in 1973.
Highlights from his presidency:

His wife, Jenny Stounopoulou, died in 1988, and Stephanopoulos leaves behind three children. His only daughter, Eirini, often accompanied her father during his political tenure.