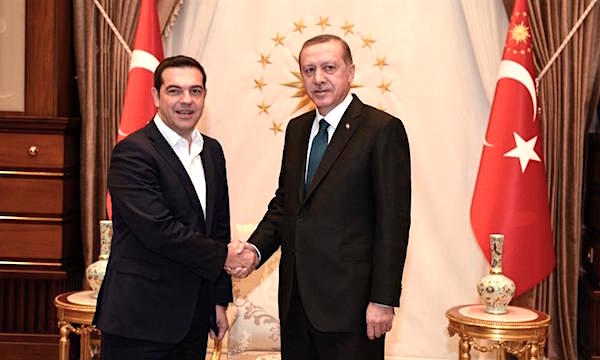 Greek Prime Minister Alexis Tsipras and Turkish President Recep Tayyip Erdogan spoke on the phone together on Friday evening, according to an announcement by the former’s office. A press release noted that the two leaders discussed developments on the Cyprus issue and the refugee problem.
It appears that the two leaders have agreed on speaking again soon towards a solution for the long-standing Cyprus issue. A conclusion to the Cyprus issue appears to be in sight following negotiations that took place last week at Mont Pelerin, Switzerland.
Cypriot President Nicos Anastasiades was in Athens on Wednesday, and briefed Tsipras on negotiations, and there are chances that a deal concerning land may be finalized between Anastasiades and the Turkish-Cypriot leader Mustafa Akinci when talks between both sides restart in Geneva on November 20, though some sources point out that there could be an extension of talks to December. There is cause, however, for optimism that a deal may be reached by the end of the year regarding security and guarantees between Greece and Turkey.