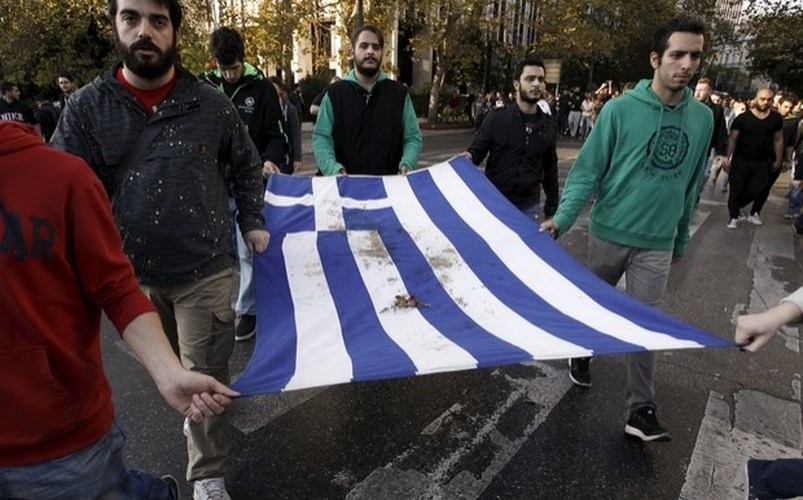 Greek authorities are braced for violent protests during the 43rd November 17 Polytechnic uprising anniversary march to commemorate the student revolt at the educational institution in 1973 that is believed to have put an end to Greece’s military dictatorship a year afterwards. Members of the socialist student union faction, originally affiliated with the PASOK party, were the first group of protestors to start marching towards the United States Embassy. The road in front of the U.S. Embassy, Vassilisis Sofias Avenue, is closed to traffic.
Another group, carrying the original blood-stained flag of the Athens Polytechnic, held a pre-rally at Akadimias and Ippokratous Street while making their way to Patission Street, near the National Technical University of Athens, known as the Polytechnic. They unfolded the flag and started their march from the embassy, while the main body of the demonstration started at the Polytechnic building after 3 p.m. After reaching the embassy they sang the Greek national anthem, folded the flag and left.
This year’s anniversary comes a day following U.S. President Barack Obama’s visit to Greece. Violent episodes were noted on Wednesday, however, Greek authorities expect more aggression and 4,000 police — some estimate 7,000 officers — were deployed in central Athens to survey the rallies taking place that are usually marred by violence each year.
https://www.youtube.com/watch?v=0uFyFN1LGhk

The first image of a black hole, captured in 2019 by Greek astronomer Dimitrios Psaltis, has revealed more support for Einstein's theory of general relativity.
Greek News