GRNews
GreekReporter.comGreecePolytechneio Uprising Anniversary Continues to Be an Anti-American Celebration

Polytechneio Uprising Anniversary Continues to Be an Anti-American Celebration 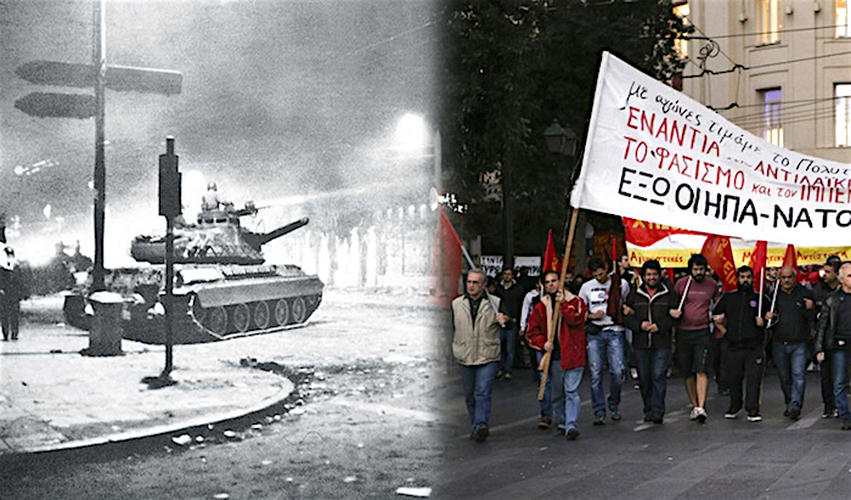 The mayor of Kaisariani, a neighborhood in Athens, announced that U.S. President Barack Obama is persona non grata in Athens. No surprise there, as the mayor is a member of the Greek Communist Party (KKE). Worse though, the national teachers union (OLME) followed short and called on everyone to participate in the peaceful demonstrations against the Obama visit on Tuesday.
When the teachers union is behaving this way, one can imagine what some teachers teach Greek children: Anti-Americanism and idealized communism. Despite the fact that history and reality proved that the latter has failed rather spectacularly. But then again reality was never a friend of Greek leftists.
What has irritated most the Greek hardcore leftists is that the U.S. President’s visit coincides with the three-day celebration of the Polytechneio uprising, the student revolt against the colonels’ dictatorship at the National Technical University of Athens — “Polytechneio” in Greek —  on November 17, 1973. The irritation reached the point of paranoia as there was even the implication that the U.S. President chose the date of his visit in order to provoke.
Since November 17, 1974, the Polytechneio uprising anniversary has become an anti-American demonstration for many Greeks. The U.S. support of the military junta is a good reason for that. But it wasn’t the U.S. or CIA that instigated the April 1967 coup, as leftist propaganda suggests. It was a bunch of nationalist army men who toppled the government and ousted the King of Greece, and were later tried and imprisoned for their crimes. Greece’s dictators never exhibited pro-American tendencies during their seven-year rule.
The role of the U.S. in the 1967 coup was not that big to justify such hatred for America. But it served as a great excuse for anti-American propaganda. For the Greek Left, the colonels who took power by force and the U.S. were considered one and the same. Anti-junta and anti-Americanism went hand in hand, like killing two birds with one stone. So the place to demonstrate became the U.S. Embassy in Athens. Hence the rally, that since 1974 is starting at the emblematic gates of the National Technical University of Athens building and culminates with demonstrators shouting anti-American slogans and/or clashing with riot police outside the embassy.
The Greek Left exploited every aspect of the Polytechneio, and especially KKE. The Greek Communist Party became legal again after democracy was restored in the country in July 1974. KKE was funded by the Soviet Union, the arch enemy of the United States. So after the party was established and won several seats in parliament, a huge communist propaganda campaign started. All of a sudden, suspicious “youth centers” opened in Greek cities full of books on Marxism and Soviet literature staffed by instructors who were there to indoctrinate young Greeks on communist ideas and turn them against anything American. At the same time, communist university professors and school teachers started propagandizing Marxism, anti-capitalism and anti-Americanism. Newspapers appeared staffed by leftist writers who propagandized leftist ideas and promoted rampant anti-Americanism, while at the same time praising the socialist way of life in the Eastern Bloc countries. It was the middle of the Cold War, and all is fair in war.
For a communist, the United States represented everything the marxist regimes of the Soviet Union and its satellites on the other side of the Iron Curtain despised: A free economy, free thinking, freedom of movement, freedom of expression, freedom of choice and other notions hated by communists that started with the f word. The U.S. was the enemy, so it had to be demonized. Along with the demonization of the Pentagon as ruthless imperialists and police as violent killers, anti-Americanism was also expressed in the form of ridiculing the American way of life and U.S. citizens who were presented as emotionless, robot-like people who work all day in order to afford to consume goods they don’t really need. They were also called racists who had slaughtered the Indians and enslaved the blacks. Even American movies were ridiculed. Gross exaggerations were written in newspapers and repeated by easily impressed people. Relentless leftist propaganda made it hip to be young and anti-American. One of the jokes that was circulating was, “Oh Columbus, what a great mistake you made.”
The Polytechneio commemoration was a convenient vehicle to perpetuate anti-Americanism. After Andreas Papandreou and the socialist PASOK party were elected in 1981 — with one of his slogans being “Greece out of NATO” — anti-Americanism became more prominent in Greece. The terrorist group that assassinated U.S. officials, among others in Greece, was called November 17. Polytechneio became officially a three-day celebration, whereas the 1821 War of Independence and the October 28 Oxi Day remained single national days.
It is no surprise that the collapse of communism and the breakdown of the Soviet Union did not deter the Greek Left to continue being anti-American. To this day, leftist parties and groups continue to view the Polytechneio youth uprising as a beacon of anti-imperialism — and subsequently anti-Americanism. Today, with the economic crisis raging, the International Monetary Fund is added on the list of hated U.S. institutions. And every year on November 17 there is the seemingly compulsory march to the U.S. Embassy in Athens. Along with the endless repetition of the same slogan mechanically uttered since 1974, “Americans, killers of the peoples.”