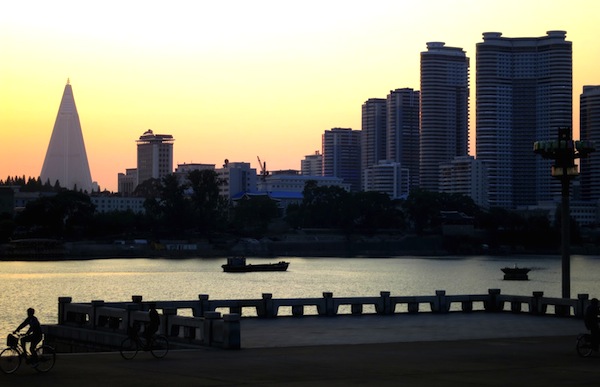 Greek journalist Fragkiska Megaloudi lived in North Korea from June 2012 to March 2014. Recently she published a book in Greek describing life in the most authoritarian country in the world, where very few foreigners are allowed to visit. Below is an excerpt of her book: “The Country of Kims,” currently on sale in Greece. Megaloudi hopes to be able to publish the book in English as well.

North Korea (or DPRK) remains misunderstood by the outside world, partly due to the lack of access by foreign journalists and researchers but also because public opinion about the country has been shaped by overused stereotyping narratives and images.

I lived in Pyongyang for almost two years, from June 2012 to March 2014. I arrived in the country together with my four year old son without knowing what to expect. Before I went to North Korea, I read numerous analysis and watched endless documentaries on the country that left me with the impression that I was about to enter a world of brainwashed “robots”. But what I experienced during those two years in DPRK, had nothing to do with the standard stereotypes. I discovered a poor but proud country and friendly people whose worries and dreams would not differ much from the rest of the world. 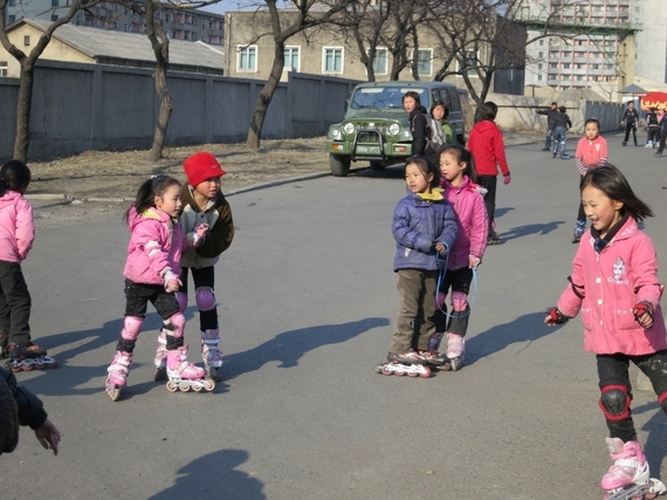 The Sunan International Airport of DPRK is situated approximately 24km north of Pyongyang. Large areas were hidden behind a giant purple sheet with red banners painted with slogan “at a breath” inciting workers to work harder in the building of the new international terminal.

A smiling police woman and a man in uniform take me and my son to the customs. Everything seems to work pretty fast-the policeman checks our passports and hands over our documents wishing us a nice stay in DPRK. Three young women in uniform play joyfully with my son while we wait for the custom clearance. Definitely this was not the image of the DPRK that one would have on mind..

Cherry blossoms line the side streets along the highway that leads to Pyongyang. Green and yellow corn fields are stretching as far as the eye can see. 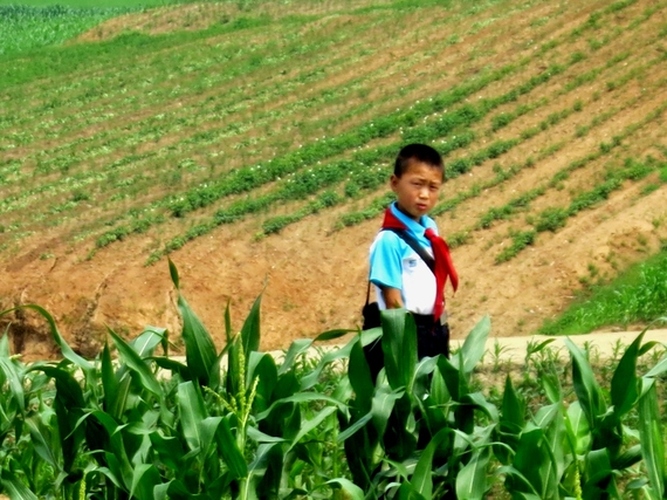 As we enter the capital the traffic becomes denser. Expensive cars with tinted windows occasionally pass crowded public buses and trucks crammed with soldiers, prompting traffic officers to raise their hands in a military salute.

In DPRK, I was able to witness its constant transformation. In Pyongyang the military barracks and shabby cottages on the banks of the Taedong River were replaced by roller-coasters, playgrounds, and tennis and basketball courts. The facades of the residential buildings have been repainted in vivid green, orange and red, broken pavements have been repaired and aging buildings were getting upgraded. People adopted a more relaxing attitude towards foreigners and often would come spontaneously to chat with me as I was enjoying the beautiful sunsets in the city.

In downtown Pyongyang, department stores were filled with goods from all over the world: Swiss chocolates, packets of Doritos, Coca-Cola and Italian wine. Clothes from the Spanish Zara stores, Chanel makeup kits and perfumes, watches and jewelry stock the shelves. Chinese middlemen, who serve as brokers between North Korean trading firms and China-based companies, secure a continuous flow of goods and equipment into the country.

Mobile phones and elegant handbags lay on the tables of smartly dressed young women who sip drinks at Sunrise Coffee and Bakery on Chongjin Street. Waitresses roam the tables with iPads, ready to place customers’ orders. On the ground floor of the building, a chef dressed in white, prepares lunch boxes of sashimi that are sold next to French cheese and Italian salami. The floor is undergoing renovation and the staff is preparing for the grand opening of a new beerhouse that will serve imported beers, beef entrecotes and German sausages.

In the “new era of prosperity” that the leadership has promised, leisure activities were becoming equally important. Sundays are an official day off but North Koreans traditionally participate in collective labor such as paving sidewalks, gardening of public spaces or planting fields. But over the past couple of years, a more relaxing approach has resulted to a growing number of people taking days off during the weekends. The new parks were full of joyful teenagers playing basketball or volleyball or practicing roller skating; Along the river young couples used to take romantic walks holding hands amidst families enjoying picnics on its banks.

Outside the playgrounds children line up to get marshmallows and candy floss from street vendors. Contrary to what state media claim, playgrounds and parks in Pyongyang are not free of charge. The prices would slightly vary from one location to another, but most of the times, fixed rates apply: 10 won to enter the park and 60 won to use the playground. Renting a pair of roller skates would cost 2,000 won, while an hour in the basketball court is priced at 4,000 won.

Official statistics are not available, but monthly state wages in the country are between 2,000 and 4,000 won. This would make parks expensive for the average North Korean family. But almost all such facilities in Pyongyang were full on a daily basis. People frequenting the parks were certainly not wealthy. Most were dressed in cheap Chinese clothes that left children shivering in the autumn chill. To my view this was an indication that private activities supplementing the meager state salaries were much more widespread than believed, allowing to an increasing number of people to spend money on small pleasures.

The average Korean family relies heavily to the underground network of markets to access food and consumer goods; markets are becoming an increasingly important source of food, especially when the Public Distribution System (PDS) fails to supply people with sufficient quantities of cereals. But they also become a source of additional income; most people seem to earn their basic living through trade while for those with better entrepreneurial skills and connections, markets present a unique opportunity to accumulate wealth and climb the social ladder.

This expansion of the markets, which developed out of necessity during the famine of the 1990s and the collapse of the PDS, has meant that de facto private ownership over productive means has emerged.

This has enabled an increasing number of North Koreans to meet their daily needs themselves and earn a living by trading; but it has also widened the gap between the haves and the haves not.

“A city of two tales”

My apartment is situated at the edge of the diplomatic compound, some 10 minutes drive from Chongjin street and the Kim Il Sung square. All buildings are old and look like reminiscent of a soviet era but the interior is comfortable and warm. A long wire fence sets the limits with the outside world; but we are free to cross our “boundaries” and merge with the ordinary Koreans.

Beyond the fences of our compound, Pyongyang unveiled itself. Deeply potholed streets surround faded old concrete buildings and houses with curved tiled roofs – often broken and replaced by rusty tin.

The single-storey houses share a common garden; laundry is hanging on long clotheslines that touch the red peppers drying on the sun. 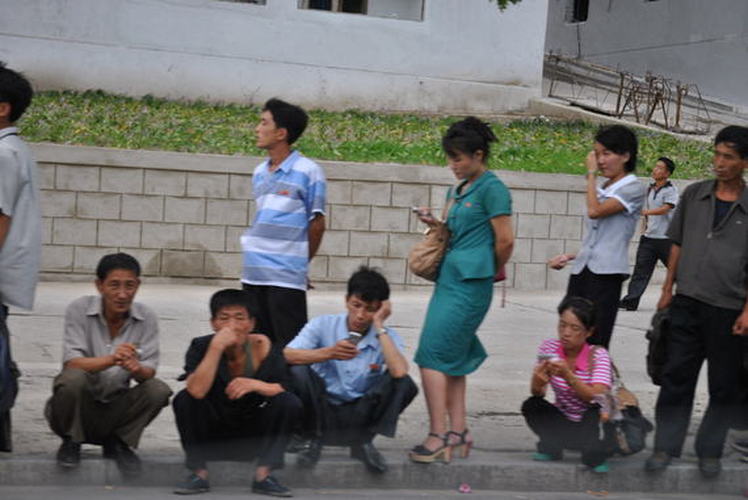 I used to take long walks in the narrow alleys of Pyongyang. The first to notice my presence in their neighborhoods were always the young children that stared at me before running to hide behind their grandmothers. Some people would wave a timid and curious hello while very few would give me a rather suspicious look.

The air is filled with the moist smell of the fresh garlic. Thick black smoke coming from metallic pots placed outside the houses makes the air unbreathable, and the eyes watery and sore.
Cylindrical coal briquettes-used for heating and cooking- can be seen along the backstreets, covered with plastic sheets and lined in long tidy rows or piled up on balconies. In the narrow alleys, men and women – with faces blackened from the dust – shovel black sticky bricks of coal dust, water and starch into round metal presses and leave them to dry. 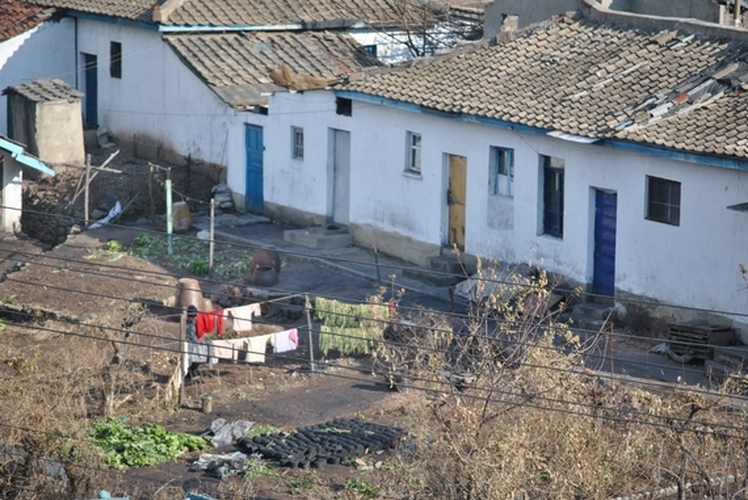 As it is always the case with reports about North Korea, the debate can be fierce and many questions are left unanswered. I don’t claim to have those answers. I can only speak of what I saw and I know. But politics and dogmatism have done much harm so far. Placing the vulnerable above politics and reinventing our solidarity and acceptance would be a great step forwards.