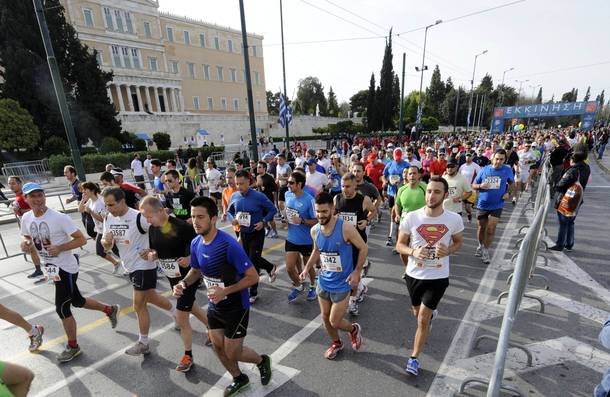 More than 50,000 athletes will participate in the 34th Athens Marathon which will be held on November 13, following the historic route of Pheidippides, the dispatch-runner who brought Athens news of the Greek victory against the Persians at Marathon and then collapsed.
“We’re happy this year to have more than 50,000 runners, but I want to tell you with great sincerity that I think we are just after halfway in relation to the goals we have set for the Athens Marathon. The goal is high. We want the Athens Marathon to be the most important cultural and sports festival in the world. We’re far from being there. We continue to try to approach it further,” the president of the Marathon’s organising committee and SEGAS chief Kostas Panagopoulos told Athens-Macedonian News Agency (ANA) in an interview on Saturday.
He said the Athens Marathon is at the heart of a very large “city break”, a four-day period when 8,000 runners from around the world along with their companions visit Athens, while there’s also an increase in domestic tourism.
“We estimate this leaves the city an amount of around 15 million euros from which benefits not just the tourism industry, but also Athens’ daily life,” he added.
(source: ana-mpa)