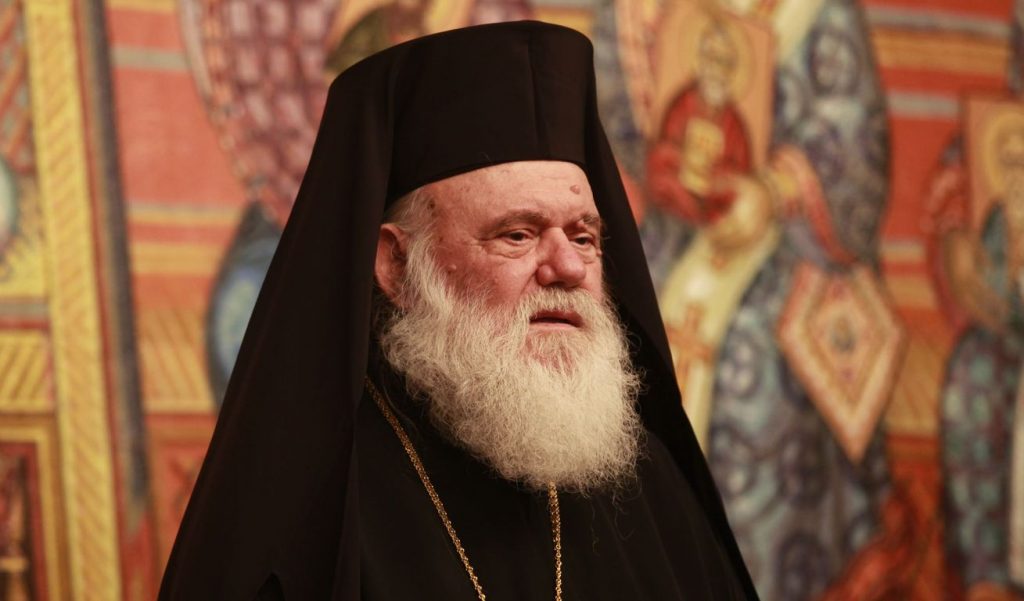 “Mr. Filis is a troubled man. He is inconsistent in his relations and in his words. He says one thing in the morning, and another in the evening,” said Archbishop Ieronymos II of Athens and All Greece about Education Minister Nikos Filis.
The Archbishop gave an interview on Tuesday night on Skai television and, inter alia, spoke of the discussions between the two men regarding religion courses in Greek schools. He said that there is an effort to “de-hellenise” and “de-christianise” Greece, meaning that there are forces that go against Hellenism and Christian Orthodoxy and the talks about separating Church and State are towards that end. He said he will defend the role of the Church in the Greek nation.
“I do not believe in fighting. I believe in cooperation. But I will not back down on my principles. I will find a way, even a dangerous way, but I will stick to my principles, and I will defend to the end,” the Archbishop said, adding that, “If things go to a dead end, will certainly not sit with our eyes closed and our hands tied. ”
“There is a maternal relationship between the Church and Greece that goes through the ages and you cannot separate the two,” he said characteristically.
Regarding his tiff with the education minister, and to demonstrate the lack of trust in his person, the Archbishop described the last meeting to discuss the lesson of religion at Maximos Mansion with Prime Minister Alexis Tsipras that was also attended by Filis: “We agreed that this year we will proceed as in previous years; we will form two committees, Church and State, that will cooperate and the result will be assessed and put into practice for the coming year. Knowing the character of our minister, I asked him in front of the prime minister, “Mr. Minister, do you have something to say?” And he replied solemnly: “We have the Prime Minister before us, we hear what he says. The minister does nothing more than implement the decisions of the prime minister, so we will proceed this way.” Well, as soon as we left, Mr. Filis changed everything. So, I felt bad, and so did the members of the committee when we went to the Holy Synod, to hear them say other things. When we protested to the prime minister’s office, they said: “Do not listen to what he (Filis) says; What the prime minister decided, this is what will be done. The views of Mr. Filis are his personal views.””
The Archbishop praised the president of junior coalition partner ANEL, Panos Kammenos who told the Archbishop after he met with Tsipras that, “We need to be fair, forthright… If you tell me, Archbishop, I will tear down the government tomorrow morning.” He said that Kammenos begged him not to leave the dialogue because a solution is needed, because the country needs consensus.
Finally, Ieronymos said that the government could postpone building a mosque in Athens until it becomes clear how many Muslim refugees will remain in the capital.