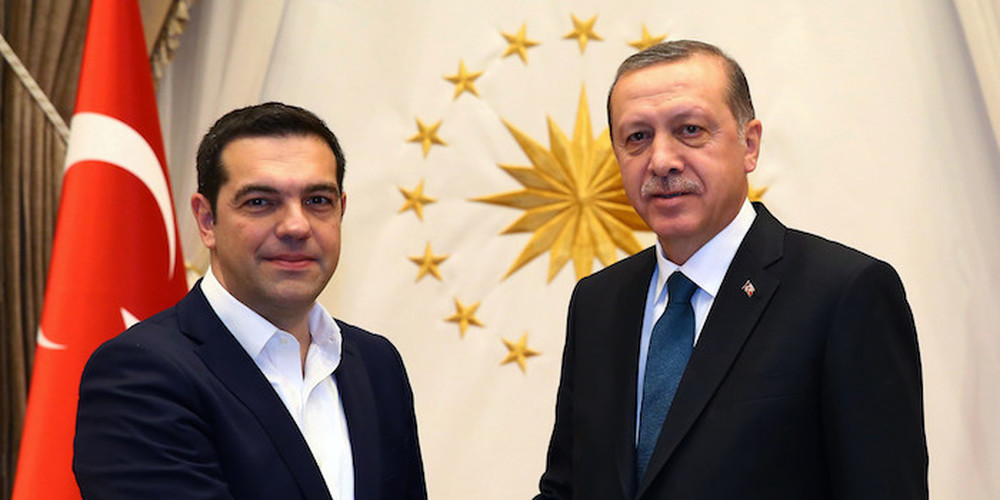 The Greek government seems to be taking lightly the recent statements by Turkish President Recep Tayyip Erdogan regarding the Lausanne Treaty. Deputy Foreign Minister Nikos Xydakis rushed to downplay the issue stating that the Turkish president essentially made the comment – that eastern Aegean islands should belong to Turkey because of their proximity to its shores – during a meeting with provincial governors. He said that Erdogan made the remark for “internal consumption”.
Prime Minister Alexis Tsipras later stated that Erdogan’s comments are “dangerous” for bilateral relations in a region that is in need of stability during these tumultuous times. He then went to repeat one of his empty slogans like “Greece will be a pylon of peace for the region” and so on. That was a very weak reply to this new show of diplomatic bullying by Erdogan.
Once again, Ankara shows that it hasn’t given up thoughts on territorial claims. The frequent violations of Greek airspace by Turkish jet fighters are a constant reminder. At the same time Erdogan shows that he wants to establish a regime where he is the all-powerful sultan and no one should tell him what to do. Not even the European Union. He has often shown his disrespect for European laws, yet he claims that he wants Turkey to become a member of the union.
Now Erdogan says that the Lausanne Treaty that established the Greece-Turkey borders in 1923 was “a defeat for Turkey”. This is his latest subtle jab against Europe. However, there hasn’t been an official comment by the European Commission on Erdogan’s statement. On the contrary, Germany seems to be washing its hands of the issue, like Pontius Pilate. German Foreign Ministry Spokesperson Martin Schaefer said that this is something between the two countries to resolve.
The EU is not very comfortable with Erdogan. At the moment, the Turkish president plays the refugee card, and he plays it well. There are 1,385,000 Syrian refugees on Turkish soil at the moment, according to Turkish newspaper reports. The Turkish president tells Europe that there are 3,000,000 and his country spends a lot to keep them. Isn’t that like saying, “If you don’t do what I want, I will open the border and let them come to you?” And he wants visa-free travel to Europe for Turks and a few billion euros in aid. For starters.
At the same time there are thousands of economic migrants on the Turkish shores waiting to cross illegally to Greece on smugglers’ boats. Reports from Turkey say that authorities could easily put a stop to the smugglers’ activities, yet they often turn a blind eye.
Of course Greece will be the country to suffer if Turkey doesn’t get its way. The government’s lack of plan and capability of handling migrants so far indicates that a major scale influx of migrants would be a catastrophe of epic proportions. Maybe that is the reason Tsipras takes the bullying and he pretends to be the good Christian who turns the other cheek. Yet, Greece’s soft stance gives Erdogan the liberty to trample, once again, on international laws and plain common decency.
And on top of that, Greece received another blow on Thursday – from its western neighbor Albania this time – when European Commissioner Johannes Hahn spoke about Athens and Tirana being in negotiations over the Chams issue. This infuriated Greek MEPs who complained that there is no such thing as a “Chams issue” to negotiate with Albania.
These are difficult times for the Greek foreign ministry and one hopes that such territorial issues should not be taken lightly, and that the “don’t worry, be happy, the Left is in power” message the government is trying to pass is not sufficient.