GRNews
GreekReporter.comGreeceTsipras and Erdogan Stress Importance of Dialogue on Cyprus and Refugee Issues 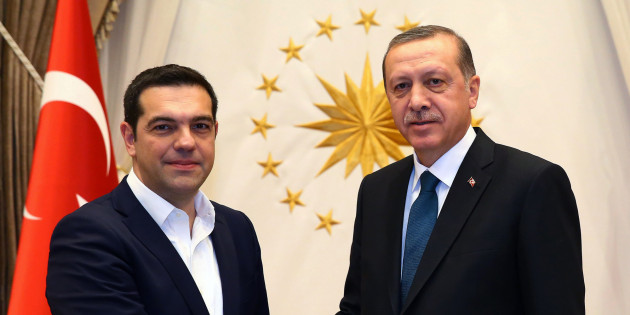 Greek Prime Minister Alexis Tsipras and Turkish President Recep Tayyip Erdogan on Wednesday stressed the importance of understanding and dialogue on the Cyprus and refugee issues.
The two state leaders met at the at Peninsula Hotel, where the Turkish mission resides, on the sidelines of the 71st United Nations General Assembly in New York City.
In the meeting that lasted almost two hours, were also present Greek Foreigner Minister Nikos Kotzias and his Turkish counterpart, Mevlut Cavusoglu. The two sides stressed the need to approach the two difficult issues with understanding and dialogue.
Tsipras expressed his solidarity with the Turkish people and Erdogan personally, saying,  “I am very pleased to see you well after this adventure. From the beginning, we expressed our support for the legitimately elected government, democracy and stability.”
On his part, Erdogan took the opportunity to raise the issue of the eight Turkish military asylum seekers in Greece, who allegedly participated in the attempted coup. To that, Tsipras replied, “Those involved in coups are not welcome in Greece.” However, he stressed the issue of justice, always act in accordance with the rules and principles of international law.
The refugee crisis was the main topic of the discussion. The two sides reaffirmed their commitment to implement the agreement between the European Union and Turkey, with Erdogan saying that good bilateral relations will contribute positively in this direction.
The Greek side expressed satisfaction at the reduction of refugee flows, arguing that Athens will support the Turkish demands for visa-free travel in Europe and the accession process if the conditions of the agreement are respected.
Regarding Cyprus, the issue of guarantees was not discussed. However, the Greek side underlined the importance of security, asking for the definitive and immediate withdrawal of Turkish troops from the island.