New Clash Between Church and Education Minister in Greece 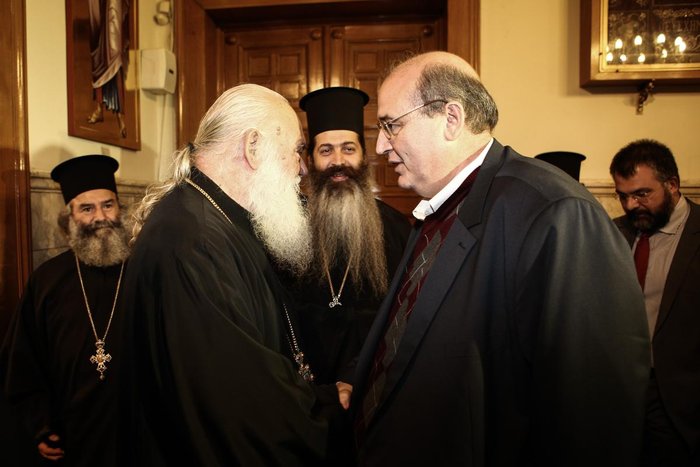 Archbishop Ieronymos of Athens and All Greece called the new changes in religion classes in Greek schools “unacceptable and dangerous,” refueling the confrontation with Education Minister Nikos Filis.
Under the changes implemented, the lessons on religion in Greek elementary, junior high and high schools will present all religions in the world with an emphasis on Greek Orthodoxy. In the past, religion classes were dealing only with Greek Orthodoxy. Ieronymos has called on Prime Minister Alexis Tsipras to intervene and take back the changes.
Filis replied calling the Archbishop’s statements an “incomprehensible dispute and scaremongering.” Education ministry sources said that the minister has complied to the three requests of the Church of Greece, namely that the religion courses are required learning, teaching hours are the same and Greek Orthodoxy will be the main subject.
The Archbishop said that the changes “will not bear fruits, they will damage our culture and society and will cause a rift between Church and State.”
The education minister replied that the changes in religion lessons are the result of three years of educational experience, several months of dialogue between teachers, theologians and representatives of the Church of Greece and that Greek Orthodoxy is emphasized.
However, previous arguments between Filis and Ieronymos indicate that there is a clash between the education ministry and the Church. Prior to the reply to the Archbishop on religion courses, Filis had questioned the role of the Church of Greece in society and its piety. During an interview on Kontra television, he said characteristically: “Where was the Church during the dictatorship? Where was the Church during the (German) occupation? We cannot bow to them and say a priori that they are holy. The Church is not holy, it is human.”

Greece’s Top Mythological Sites That You Can Still Visit