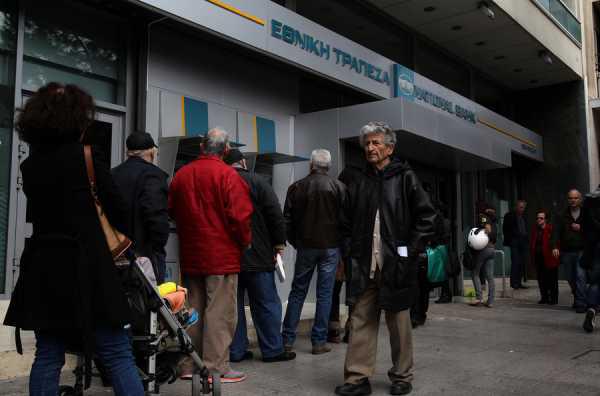 Capital controls in Greece are unlikely to be lifted in the foreseeable future, says a Vima newspaper report, citing a high bank official who talked of a “long and rocky road.”
According to the bank official, there are two reasons that point to the fact that capital controls will not be lifted any time soon. Namely, the effective management of non performing loans and lack of liquidity in Greek banks.
According to the report, “progress on both these issues is disappointing, making the road to suspension of capital restrictions long and rocky.”
The delay in the completion of the first evaluation of the bailout program in the spring resulted in 2 billion euros in deposit outflows until the end of April. Since then, it took four months for deposits to return to the level they were at the beginning of the year, which is about 123 billion euros.
The recovery of funds is attributed to increased tourism revenues, reduction in the number of imports and, to a lesser degree, on individuals, who after the government’s agreement with creditors had limited their cash withdrawals.
Deposits showed further increase after July 23, when the relaxation of capital controls for new deposits allowed for more cash withdrawals.
The bank executive said characteristically that, “On the one hand, the increased tax liabilities of the particular time period “eat up” the savings of our customers and on the other hand the general climate of instability, keep money away from banks and leaves them in deposit boxes and hidden under mattresses. It is expected that deposits will remain near the historic low created after the imposition of capital controls.”

Each year, hundreds of people gather on Mount Olympus for the annual Promitheia festival dedicated to the Ancient Greek spirit.
Diaspora

Greece announced on Monday that it will introduce legislation which will abolish restrictions to vote for diaspora Greeks.