The Authentic Greek 'Tsipouradika' of Volos 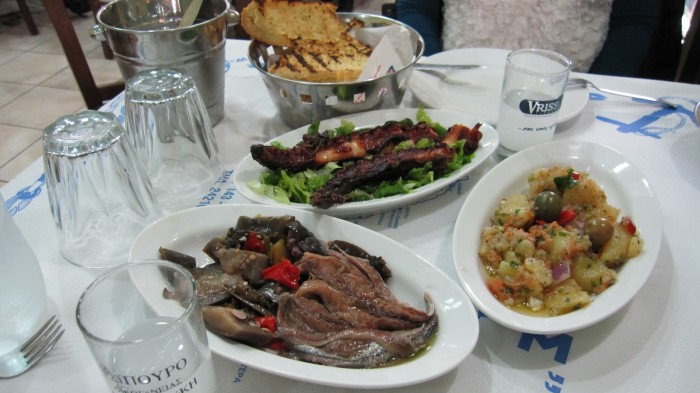 Tsipouro or raki is a pomace brandy produced in Greece and in particular Thessaly (Tsipouro Tyrnavou), Epirus, Macedonia, Mani, and the island of Crete. It is a strong distilled spirit containing 40-45% alcohol by volume and is produced from the pomace (the residue of the wine press). There are two types of Tsipouro, the pure and the anise-flavored.
The production of tsipouro was the result of the poverty and ingenuity of locals, who used the remnants of wine production in order to create the special Greek drink. Raki was soon turned into a symbol of pride, dignity and manliness for ordinary people.
In modern history, the production of tsipouro was associated with certain tavernas, known as tsipouradika, which first appeared in the city of Volos and where usually owned by refugees from Asia Minor.
At first, the Greek spirit was mainly produced in Tyrnavos and the villages of Pelion, while it was consumed through small shot glasses without any food or with small appetizers, such as salted food, lakerda, tomatoes, cucumber, olives and sardines. The refugees brought with them the love and habit of eating seafood appetizers and snacking while drinking tsipouro and thus the tradition was born.
In the authentic ‘tsipouradika’ of Volos, patrons never order, they just make sure to let the servers know how much tsipouro they need, and if they want it with anise or not. The tsipouradiko owners take care of the rest. Numerous delicacies are sent over to each table, ranging from pickled vegetables to fried seafood. As the clients order more tsipouro the dishes become more complex.
Some of the delicacies offered in the tsipouradika of Volos are: salted olives, peppers or anchovies, marinated sardines, lakerda, fried cheese squid, anchovy, cod, meatballs, or eggplants, stuffed vine leaves, pastrami, spetsofai, strong flavored cheese and seafood prepared with various recipes.