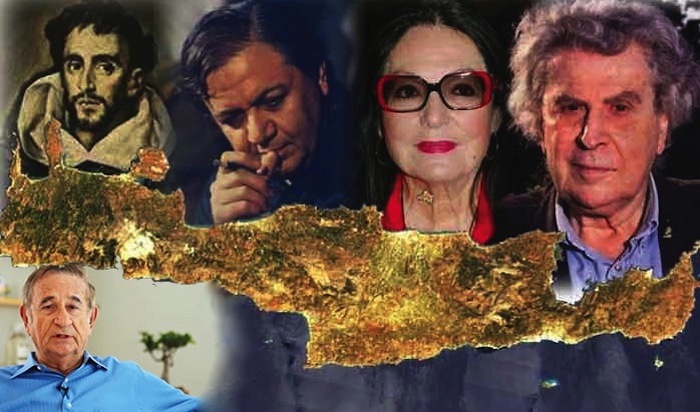 Crete is the largest and most populous of the Greek islands and it is famous across the globe for its beaches, clear waters and exceptional cuisine. However, what many people don’t know is that some of the most important Greeks throughout history and also in our modern days are of Cretan descent. Here we list some of them:
Manos Hadjidakis, the famous Greek composer who won an Oscar for his musical score in the film “Never on Sunday,” was born in Xanthi, northern Greece. His father, however, came from Rethymno, Crete.
Mikis Theodorakis, one of Greece’s most well-known composers alive, was born in Chios but his father originated from Kato Galatas, Crete. Theodorakis is famous for his work on the scores of “Zorba the Greek” and “Serpico,” as well as also for his oratorio “Axion Esti.”
Domenikos Theotokpoulos, also known as “El Greco,” was a well-known Greek sculptor and painter born in Fodele, Crete, in 1541. He lived in Greece, Italy and Spain and was known for his expressionistic style.
Vikentios Kornaros, the famous 17th century writer, was born in Trapezounta, a village near Sitia, Crete. He is known for his lyric poem “Erotokritos,” consisting of over 10,000 15-syllable rhymes.
Eleftherios Venizelos was an eminent Greek leader who led the struggle for Crete’s independence during the Turkish occupation and fought for the island’s reunification with Greece. He served as Greek Prime Minister and through his diplomatic acumen, he managed to double the country’s area and population with the liberation of Macedonia, Epirus and the rest of the Aegean islands.
Nana Mouskouri, an internationally famous Greek singer, was born in Chania, Crete. She was trained as an opera singer and has worked with great Greek artists such as Hadjidakis. She has recorded songs in many languages, including Greek, French, English, German, Dutch, Italian, Portuguese, Spanish, Hebrew, Welsh, Mandarin Chinese, Corsican and Turkish.
Eftychios Vlahakis: Known as Van Vlahakis in the U.S., he was an American entrepreneur of Greek origin and a pioneer of environment-friendly cleaning products. Vlahakis was born in Chania on January 14, 1935 and left his war-torn town after WWII. He arrived in the U.S. as a poor immigrant and with 22 dollars in his pocket he managed to establish Earth Friendly Products, the first and largest-today Green cleaning products manufacturer in the world. Much of the green movement’s evolution in household products is attributed to special formula’s and techniques he developed. Vlahakis passed away in his Florida home on April 6, 2014. His life story was the basis for the 2013 film A Green Story.

The Oldest Street in Athens and Europe

The oldest street in Athens, and the whole of Europe, is about 2,500 years old -- and is located in the Plaka neighborhood.