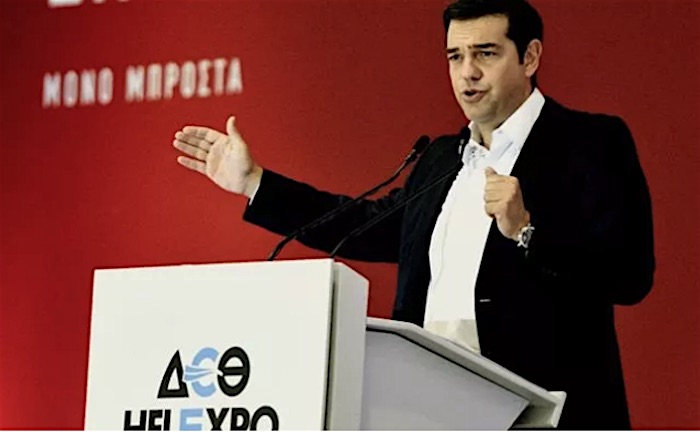 “We usually say we are at a turning point. I will say that this year’s Thessaloniki International Fair (TIF) is held at the point of turning. Because we are exactly at that point where our economy is changing from a negative trend of a seven-year recession to positive growth rates. And today, more than ever, it is necessary to visualize and plan a Greece that will leave behind all the catastrophic mistakes of the past,” Prime Minister Alexis Tsipras said on Saturday in the opening remarks of his speech at the 81st TIF in Thessaloniki.
Tsipras made is presence and his vision for a better Greece known to an audience of thousands of attendees and dignitaries at TIF. The annual commercial exhibition event is of great importance in Greece and southeastern Europe and took place at the Thessaloniki International Exhibition Center in Thessaloniki, Greece.
It may have been obvious from onlookers that the Greek PM wanted to forge ahead despite not only lagging behind on reforms needed to receive the second bailout tranche but also with the Greek economy shrinking in comparison to other EU member-states, Tsipras made mention of Greece celebrating 200 years of independence (post Greek Revolution) in the next five years, and was positive about the rate of growth the country would see economically within that time.
On the matter of reforms, the prime minister spoke of “partners” changing their stance, and he may or may not have been referring to the bailout obligations that Greece still has not met in order to receive a much-needed, but not yet released disbursement of tranche funds. He did his best to be optimistic of the advantages of focusing on “research, innovation, new technologies, and start-up businesses” within Greece in order to create wealth.
The EU-Mediterranean Summit, held Friday, September 9, in Athens, was also a step in the right direction. Tsipras met with leaders from France, Italy, Portugal, and Malta, where the leaders committed to overcoming policy challenges together. The Premier’s belief is that policy changes done solely as a country or in partnership with others allows for Greece to move into a much better economic space. “The country’s image abroad was not a natural phenomenon or just luck, but the result of specific policy choices and battles. We managed to escape from commitments made by the previous government after long and hard negotiations. We achieved lower budget surplus targets, offering a breath to the society and the economy. In 2015 we pledged for a budget target of -0.25 pct and we presented a surplus of +0.7 pct and in 2016 we will continue surpassing targets”, he said.
The Premier said in two years, the government will have the necessary fiscal space to reduce indirect taxes and to lower taxation on property replacing ENFIA with a new more fair tax. He stressed that the government is fully implementing its commitments made in the 80th TIF last year: protecting home owners, supporting farmers, maintaining ADMIE under state control, offering healthcare to 2.5 million people with no social security, preserving main pensions and abolishing a zero deficit clause for supplementary pensions, reforming civil administration, presenting a new regulatory framework for education, taking measures to support new scientists, revising legislation on public works, reviewing tax evasion lists, as well as the finally completed tender for TV licenses in “a fully transparent way beneficial for public interests”.
Tsipras announced that 246-mln will be used to fund a program offering food to another 60,000 pupils and students in the poorest municipalities, covering 260,000 pupils around the country, offering school access to additional 15,000 kindergartners, and to fund an ambitious program offering incentives to thousands of young scientists to return to Greece. Part of this money will be used to improve services offered by state hospitals with the hiring of 10,000 doctors and medical assistance personnel.
Political mentions
The Greek PM could not complete his speech without mention of his political rivals, he said, “in 2008, before the crisis, Greece had a per capita income of 98 pct of the EU average and in five years this fell to 68 pct, a percentage similar with that of Greece compared with European Economic Community countries in 1975. Within this five-year period and the catastrophic choices of New Democracy and Pasok, one-fourth of national wealth was destroyed, available income fell by 40 pct, unemployment soared to 28 pct and poverty widened to 38 pct”.
Closing remarks
The Greek PM said the government’s plan was building wide and stable social alliances in a “national effort to find our footing after the country learned its lesson from the past” and expressed his optimism that the country will achieve its goals.
(With information from ana-mpa)