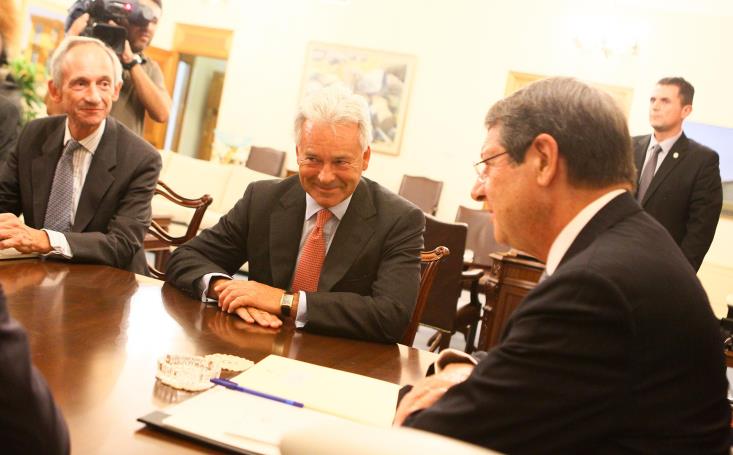 Minister of State for Europe and the Americas at the Foreign and Commonwealth Office Alan Duncan reiterated on Wednesday in a meeting with the President of Cyprus Nicos Anastasiades the UK’s “generous offer” on the sovereign bases made in 2004.
Anastasiades received Duncan in the framework of the latter’s three-day visit to the island.
Duncan told the press that the meeting with the Cypriot President was a “very constructive” one, noting that “it is an important part of my visit to say how much we admire his leadership in developing the talks to the stage which they have reached.”
“We very much hope that the talks can continue towards a constructive solution and a settlement, and that is what we all want for the future of Cyprus,” he said.
“I reiterated what I think many people thought was a generous offer the United Kingdom made in 2004 on the sovereign bases which I hope can underpin a lot of our contribution to encouraging a successful outcome,” he noted.
Replying to a question he said that Britain’s bilateral relations with Cyprus could deepen after the Brexit.
Brexit is going to happen and that Britain will be leaving the EU “because that is how the people voted” he said, but noted that “we are still an outward looking country. We are still a globally minded country and we are not leaving Europe, we are merely just changing the manner in which we are governed and we will still be a full member of the trading world and a full part of a world community and that would include perhaps a deepening bilateral relationship here in Cyprus.”
Source: CNA