GRNews
GreekReporter.comGreecePoll in Greece: New Democracy 10 Points Ahead of SYRIZA

Poll in Greece: New Democracy 10 Points Ahead of SYRIZA 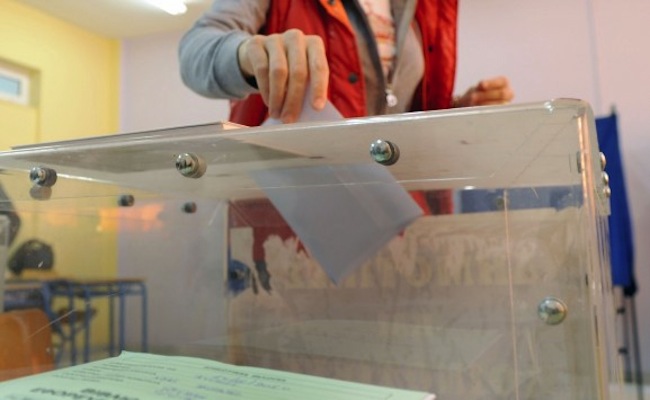 New Democracy is 10 points ahead of SYRIZA in a new opinion poll on intention to vote that was released on Monday.
The survey was conducted by the Research Institute of the University of Macedonia on behalf of SKAI television and shows that 27.5% of participants would vote for New Democracy and 17.5% for SYRIZA.
A poll conducted by the same researchers earlier in the summer showed the conservative party 11.5 points ahead of the leftist party (28.5% against 17%).
On intention to vote, New democracy is ahead with 27.5%, SYRIZA follows with 17.5% and Golden Dawn comes third with 7.5%. The Democratic Coalition (PASOK-DIMAR) and the Greek Communist Party (KKE) tie in fourth place with 5.5% each. The Centrists Union stands at 3.5%, Independent Greeks (ANEL) at 2% and To Potami and Popular Unity tie at 1.5%. A large percentage (18.5%) answered that they are either undecided or didn’t want to answer, while 9.5% said they would vote for another party.
Overall, 52.5% of participants said they believe New Democracy will win the elections, while 18.5% are confident that the ruling party will be in power again after the elections. Regarding popularity of party leaders, 22% of participants prefer Kyriakos Mitsotakis as Greece’s leader and 19% choose Alexis Tsipras.
One of the questions was how the government handled the broadcasting license auction, with 64% of citizens believing that ulterior political motives are hidden behind the process and only 22% appear to agree with the government’s argument, that the purpose of the tender was to put order and bring transparency in the broadcasting field.
Regarding approval or disapproval of the government’s performance and policies so far, 81% of respondents believe that “things are moving in the wrong direction,” while 85.5% say they are not satisfied with the government’s performance so far. Also, 72.5 percent of SYRIZA voters replied they are not satisfied by government’s performance.
Regarding the economic outlook, 62% of citizens believe that the economic situation of their household will probably or certainly worsen over the next 12 months, compared to only 7% who consider it would probably or definitely improve.
Finally, with regard to the refugee crisis, 66% of people appear to disagree with the government’s handling, compared to 20% who say they agree.