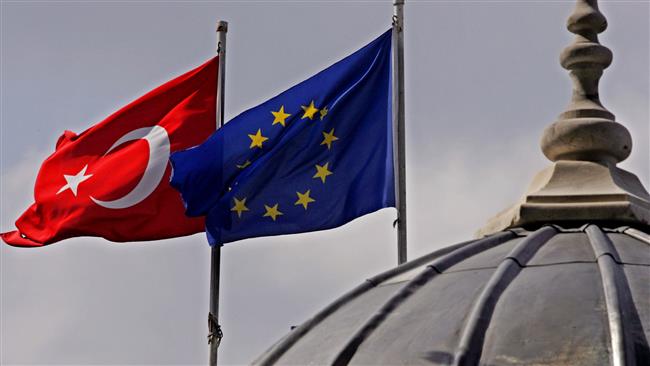 Easing EU fears, a senior Turkish official on Saturday said his country would fully implement its part of a deal meant to keep migrants from Europe’s shores even if the European Union refuses to abolish visas for Turkish citizens. But he warned that expanded cooperation on migration depended on that demand being met.

The pledge from Europe Minister Omar Celik after his meeting with EU foreign ministers eased immediate concerns that the agreement now crimping the flow of migrants into Europe was in danger.

Celik said his meeting ended with “very strong consensus about focusing on the positive agenda and to further enhance the cooperation between Turkey and the EU.”

Still, the talks yielded no apparent indication of substantial progress on relieving tensions that have worsened in the aftermath of the July coup attempt against President Recep Tayyip Erdogan.

Turkey has instituted a sweeping crackdown against wide segments of society since then, sharpening anti-terror legislation to include critical journalists, conducting mass arrests and firings from public sector jobs and flirting with the possibility of reintroducing the death penalty.

The EU sees such moves as contradicting European human rights norms. It says visa-free travel for Turkish citizens is tied to Ankara rolling back its clampdown. With both sides standing firm there had been fears ahead of the meeting that Turkey might retaliate by backing out of the deal committing it to take back migrants from Syria and elsewhere attempting to enter the EU illegally from Turkey.

Celik appeared to banish those concerns. He told journalists that Turkey would “continue to implement” the deal even if its demands on visa liberalization are not met. At the same time, he warned that without a visa deal, Ankara would not be part of any new arrangement to manage what he said were expectations of a greater migrant influx in the future.

He invoked the security problems at Turkey’s borders with Syria and Iraq, saying “it is not rational to expect from Turkey to make any change in the anti-terror law” as long as radical insurgencies rage in those countries.

“We can make some commitments for the future” on the law, he said, without offering anything specific. Meanwhile, said Celik, the EU should move ahead on visa liberalization.

Celik said he also complained at the meeting of slow and tepid expressions of EU support for Erdogan and Turkish democracy in the wake of the coup attempt.

“Faced with a serious attack, the EU sent out a weak message with respect to democracy,” he said.

German Foreign Minister Frank-Walter Steinmeier said the complaint had some merit. Speaking separately, Steinmeier described EU expressions of empathy and support after the coup attempt as potentially lacking “the necessary form and intensity.”

At the same time, he urged Turkey to prosecute those involved in the coup attempt “with moderation and application of the rule of law.”

Ankara is also angry over calls by several EU government officials to suspend, or even end, more than a decade of talks on Turkey’s entry into the EU, again because of concerns about the state of human rights. Celik said such demands put “the future of Europe into jeopardy.”

Mogherini sought to put that issue to rest, referring to Turkey as an EU candidate. But she said that status mandates “clear and so open” discussions about “issues related to rule of law, the need to have fair trials, some issues related to media freedom and freedom of expression, and obviously the old debate about the death penalty.”

Ahead of the meeting with Celik, several ministers appeared keen to walk a fine line between pushing Turkey to heed their concerns without further worsening relations. Linas Linkevicius, Lithuania’s foreign minister, called Turkey “very important for the solution of current challenges facing Europe and the world.”

“When you have seen the number of arrests, the developments in the country, we are worried,” he said, expressing particular concern about the possible reintroduction of the death penalty.

That, he said, would spell “the end of … (Turkey’s) hopes for joining the European Union.”
(source: VOA)