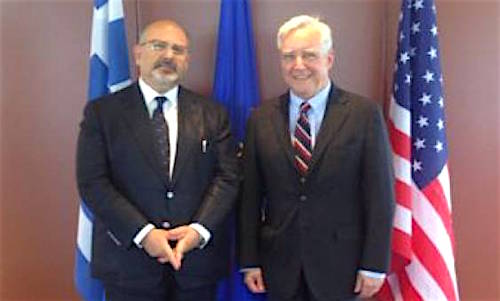 Greek-American relations are entering a new and very productive phase, since Greece is an extremely important partner of the United States because of its geopolitical importance, the U.S. Ambassador to Greece, David Pearce, said on Friday, during a meeting with Alternate Minister for European Affairs Nikos Xydakis.
Xydakis hosted a farewell luncheon for the ambassador who is retiring and therefore leaving Greece in the first two weeks of September.
Pearce also praised the efforts of Greece to exit the economic crisis and become a pillar of stability and security for the entire region, despite having received huge flows of refugees into it over the past year, according to a press release by the foreign ministry.
(source: ANA-MPA)