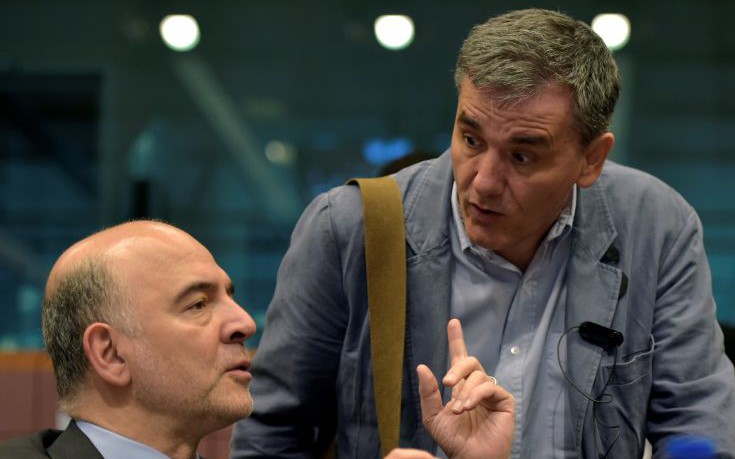 The Euro Working Group discussed Greece’s bailout program on Monday ahead of September’s Eurogroup, with European Commission sources saying that Athens is behind in its obligations.
European Commissioner for Economic and Financial Affairs Pierre Moscovici met with Greece’s Finance Minister Euclid Tsakalotos and Economy Minister Giorgos Stathakis in Brussels on Monday to discuss the issue of the upcoming review. They agreed that the review should be completed as soon as possible.
The second evaluation of the bailout program progress is due in September in order for Greece to receive the loan installment of 2.8 billion euros. It is estimated that the amount is not likely to be disbursed before October.
Along with the prerequisites of the bailout deal — such as labor law reforms — two major issues remain open ahead of the negotiations with creditors: The appointment of the board members of the new independent privatization fund and its operation mode and the liberalization of the energy market. The issues will be addressed during the September 9 Eurogroup.
Regarding the energy market, the Greek government has contacts with the European Investment Bank, as several funds are waiting to invest in Greece on renewable energy sources. However, Athens is stalling on the issue of opening the energy market.
According to a Real.gr report, the issue of the Greek statistical authority (ELSTAT) will be discussed. The report says that Greece’s European partners believe that by prosecuting the former chief of ELSTAT it is damaging the country’s image in international markets. The official EC position is that Greece’s 2009 deficit figures were not bloated, the Eurostat figures were correct and the former chief of ELSTAT should not have been prosecuted.