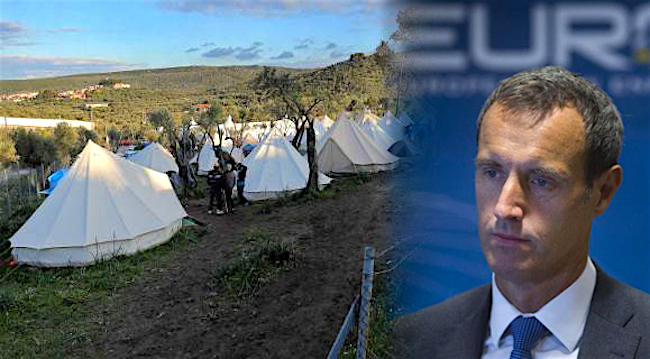 Europol secret services across EU countries is preparing to dispatch 200 officers to Greece over the coming days in order to detect possible extremist islamic factions of ISIS operating at refugee hotspots. The operation, referred to in an interview by Europol Director Rob Wainwright with UK newspaper Evening Standard, is in response to information that the Islamic State is planning to send militants to EU countries for retaliative action against its defeats in Syria.
The article, titled “Revealed: ISIS Sends New Waves of Jihadis to Attack Europe”, points to reports that ISIS extremists are planning “impressive” attacks in the EU in the near future.  These will be similar to attacks that have already been carried out in Paris and in Brussels.
“The officers will be deployed to the Greek islands, maybe in Italy. There will be a second line of defense. We hope to assign some officers in the refugee and migrant reception centers as we are concerned about reports that these hotspots are targets for efforts to radicalize migrants,” he said.
Wainwright points to a large number of jihadists already holding fake EU passports when traveling from Syyria to Europe. He says that in Greece, there are members of the group at hotspots and there are fears that new members will be recruited there.
Turkish secret services have been asked to assist EU intelligence in weeding out extremists involved in the radicalization of refugees at reception centers. It is believed that there are currently around 50 operations aiming to tackle terrorism in Europe at the moment.

The Penelopean Daycare in Athens has taken care of some of the most disadvantaged children in the Greek capital for decades.
Europe

A new border surveillance drone, which represents the next generation of unmanned surveillance aircraft, will be manufactured by a Greek firm.
Charity