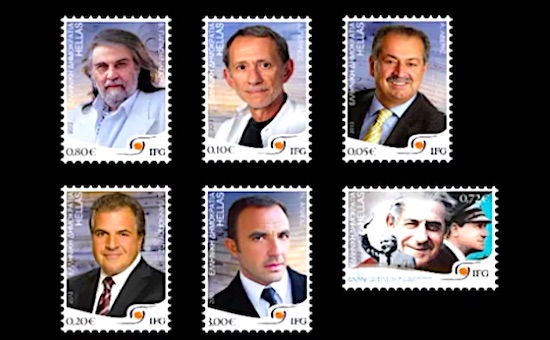 Five distinguished Greek personalities living abroad will be honored with a commemorative series of stamps. An event will be held on September 1 at the Acropolis Museum to inaugurate the collection following the choice of personalities by the International Foundation of Greeks (IFG) that based the choice on the efforts that the candidates had made to promote Greece.
The five personalities are:
Costa-Gavras: Greek-French director (featured photo) born in Loutra Iraias, Arcadia, but lives and works in France creating internationally acclaimed films such as “Z,” “Mad City,” “Betrayed” and many more. He has bought attention to numerous international issues. Indeed, “Z” was an account of the undermining of democratic government in Greece in the Sixties.
Rita Wilson: The Greek-American actress, wife of Tom Hanks, is very proud of her Greek roots. Rita was born Margarita Ibrahimoff, daughter of a Greek mother and Bulgarian father, but she was raised Greek Orthodox. She was responsible for ensuring the creation of Nia Vardalos’ “My Big Fat Greek Wedding” and insisted on it being Greek all the way, said Vardalos. The couple also produced “Mamma Mia,” another success story promoting Greece.
John Catsimatidis: A Greek-American businessman who is on Forbes List is proud to receive the award for his entrepreneurial skills. About the Hellenic Post’s decision to award him a stamp, he says: “Having been born in Greece and having left at 6 months old, it makes me proud to have been asked and somehow makes the spirit of my past family, those of my mother, father and grandparents, look down from above and be proud,” he told the Huffington Post of the award and event that he will personally attend. He says that he will continue trying to invest in Greece in the future and is proud of his Greek heritage.
George Stephanopoulos: A Greek-American journalist who is a member of the U.S. Council of Foreign Relations and who rose to prominence when he became the White House Communications Director under Bill Clinton in 1992 and Senior Advisor for Policy and Strategy before departing in December 1996. His mother was the Director of the Greek Orthodox Archdiocese of America National News Service and he long considered entering priesthood and even has a masters in theology.
Dr. Peter H. Diamandis: A Greek-American engineer, physician and entrepreneur born in the Bronx. His achievements are far too numerous to mention. He was the key subject of the documentary, “Orphans of Apollo” and is on the New York Times Bestsellers list as the author of “Abundance – the Future is Better than you Think.”