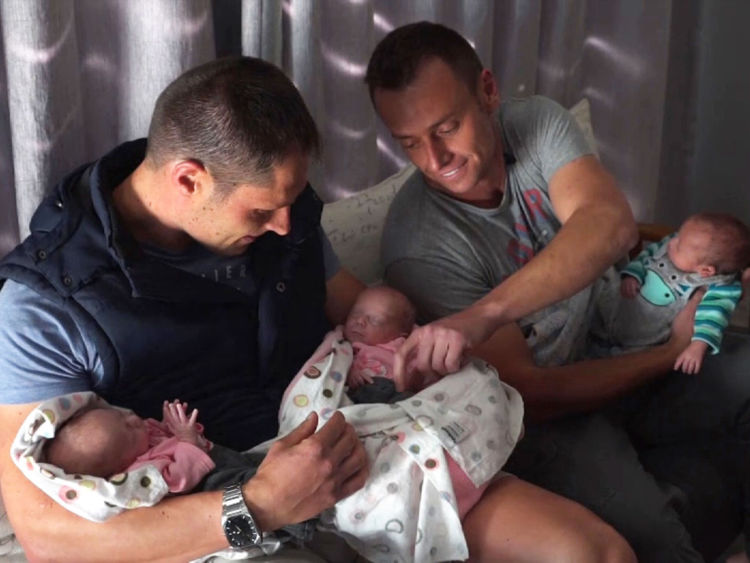 In South Africa, Greek-Cypriots Christo and Theo Menelaou were blessed with triplets — identical girl twins and a boy — through a surrogate.

The occasion is quite rare as twins are in IVF as well as the DNA, or sperm donation, was from both of the men, meaning that they are both biological fathers to the newborns.

The pregnancy was not without its challenges as they found out that one of the two embryos transferred back into the womb for the IVF had divided and that the surrogate was actually carrying triplets. The OBGYN that their surrogate was seeing at the time advised that two of the babies be terminated to give the third a better chance, but they eventually found a doctor who agreed to help them carry the babies to as close to term as possible, news.sky.com reported.

Their surrogate delivered prematurely at just 31 weeks on July 2 where the triplets were weighed in at low birth weights.

Christo Menelaou told Sky News: “When you are gay, there is always the thought that it just may not be possible to be a parent no matter how much you would love to be.”

“It’s very hard to be accepted for adoption and we were told we would always come after heterosexual couples. And then we just never thought we’d ever find a person who would want to be surrogate to a gay couple,” he added.

The couple met their surrogate in a strange turn of events while they were all neighbors of former Paralympian Oscar Pistorius, and the community had a get together following the events of the murder trail.