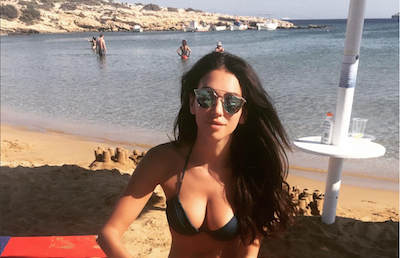 Greek-Irish model Georgia Penna was recently spotted on the island of Naxos enjoying the summer sun with husband Joe Penna.

The model frequently visits Greece in the summer, as she was spotted on the islands last year as well in the picture above, and this time she decided to take the whole family with her.

Paparazzi snapped plenty of photos of the model in the sea and on the beach in a white bikini, while onlookers say she was mostly concerned with her twins and being a mom while under the shade.

Greece has hosted plenty of celebrity vacations this year, as other celebrities spotted on the islands include Leonardo DiCaprio, Lindsay Lohan, Tom Hanks and Rita Wilson. Apparently, Hollywood enjoys the blue Mediterranean waters and stunning beaches as much as the rest of the world does when it comes to choosing vacation spots.