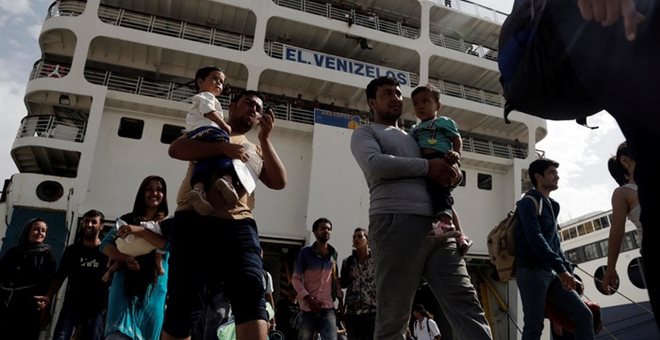 New Democracy lawmaker Lefteris Avgenakis accused the Greek government of secretly preparing to resettle 3,000 refugees from Germany to Crete.
Recently, Migration Policy Minister Yiannis Mouzalas announced that 2,000 refugees and migrants from the Greek mainland will be transferred to Crete.
The 3,000 refugees from Germany will be transferred to Crete as per the Dublin 3 Agreement. They are expected to land on Heraklion and later on Chania in December. The news is confirmed by independent MEP Notis Marias on Radio Crete. However, Mouzalas denied the allegation about the refugees from Germany.
Allegedly, the decision has created an uproar on Crete, as Cretans fear that the refugees will stay there permanently and they would hurt the island’s tourism.
Avgenakis spoke on Skai television on Sunday morning saying that Mouzalas was on Crete three days ago where he had secret meetings with mayors, the regional governors and SYRIZA lawmakers elected on Crete without inviting members of the opposition or other Cretan administrative bodies.
Avgenakis accused the government of withholding information from the other parties on the migration issue and blamed it for inadequate handling of the refugee crisis.
The ND lawmaker also wondered aloud during the interview: “Why do we not distinguish between refugees and migrants? Why have we not created pre-departure centers? Why don’t we absorb the allocated funds? What is the government’s handling of the migration crisis?”