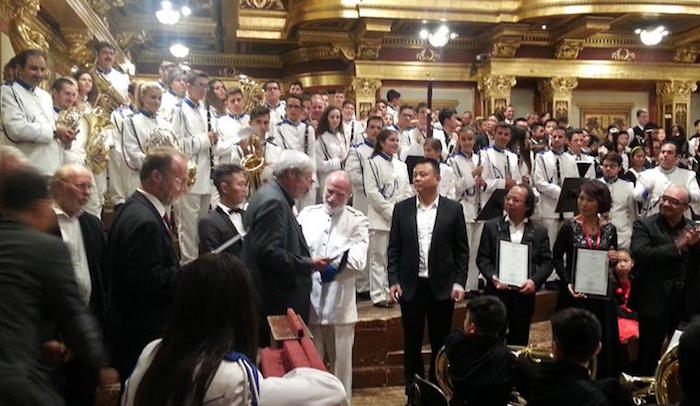 The Mantzaros Philharmonic Society of Corfu was awarded the gold prize at the World Orchestra Festival 2016, held in Vienna, while the orchestra’s renowned conductor and trumpeter, Socratis Anthis was awarded the prize of “excellent conductor.” The Corfiot orchestra returned home with two new awards and numerous unforgettable experiences, such as the concert at the famous Musikverein, a seminar at the Music Academy of Vienna and an open-air concert in the Town Hall Square.
However, the philharmonic society’s journey to the festival was not as smooth as the members would have wanted. The society is facing financial troubles. Last year, even though the festival’s organizing committee had invited the Mantzaros philharmonic to Vienna they were not able to attend the event. This year, thanks to Sophie Andree, managing director of Lyra Concerts, the society was sponsored by the pharmaceutical company Boheringer Ingelheim RCV GmbH & Vo KG. Greek Aegean Airlines was also able to donate three tickets to the society, while another 50% of the expenses were covered by the members’ families.
Mantzaros was the only Greek philharmonic society to participate in the international festival.
The Mantzaros Philharmonic Society, founded in 1890, provides free music lessons to children on the island of Corfu. The Society currently educates over 265 students who are taught different musical instruments. It operates three different bands with a total of 265 members and has performed in Greece, Austria, Bulgaria, etc.