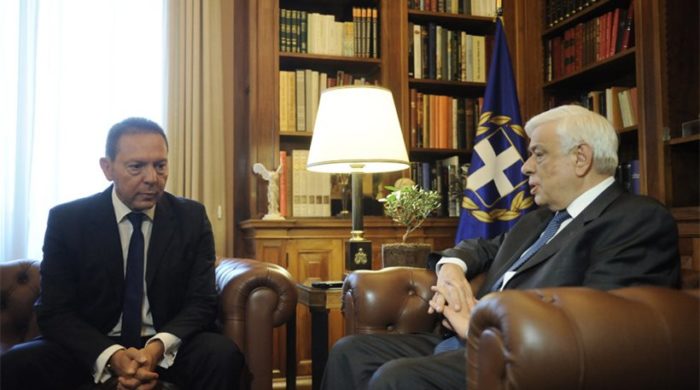 The European Central Bank lacks the necessary tools to deal effectively with the debt crisis and the banking crisis and this is one of the major shortcomings in the Eurozone, President of the Hellenic Republic Prokopis Pavlopoulos said on Tuesday, in a meeting with Bank of Greece Governor Yannis Stournaras.
The ECB’s President Mario Draghi was “a man that has proven that he defends the Eurozone and the euro,” Pavlopoulos said, adding that Greece must align itself “with the states that will contribute so that the ECB is able to rise to the occasion, having the appropriate means. Even if this requires a change in its charter.”
Stournaras, while briefing the president, noted that developments for Greece were now more positive than a short while ago and that the ECB was a “pillar of stability in Europe.”
“We would like, the members of the ECB board, for governments through fiscal policy but also through reforms to also contribute, all those that are able, of course, and have what we call the ‘fiscal margin’ to do so,” he added.
(Source: ANA-MPA)